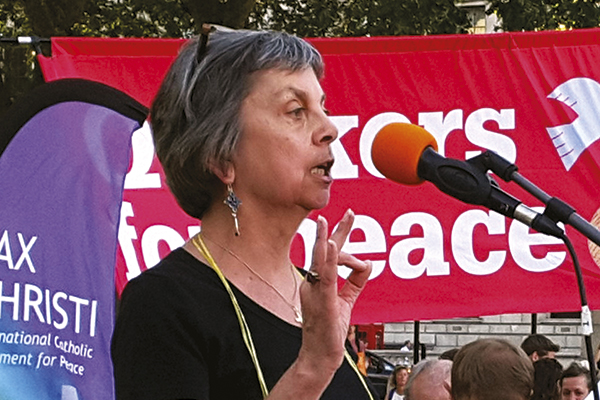 As the indomitable campaigner steps down as head of Pax Christi, she talks to Peter Stanford about what it takes to make peace happen – persistence, diplomacy and hard work

A commitment to justice and peace has long been one of the hallmarks of how the Catholic Church operates on a global, national and local stage. But work for justice has always tended to receive more emphasis than work for peace.

The two, of course, are often so intimately linked as to be indistinguishable – which might be why the Vatican has renamed its Justice and Peace Commission the Dicastery for Promoting Integral Human Development. Opting to be on the front line of the peace movement can be the road less travelled – as Pat Gaffney knows.

This Easter will see Gaffney stand down after 29 years as general secretary of the English and Welsh branch of Pax Christi, the international Catholic movement for peace. In those almost three decades, she has been arrested 11 times and jailed four times, usually but not always for her part in the annual witness on Ash Wednesday when peace workers mark – “Please don’t say daub,” she gently urges me – the Ministry of Defence with crosses in the same ash and charcoal used in the liturgy earlier that day.

Gaffney has served sentences ranging from a few days to a few weeks for criminal damage or – ironically – “breach of the peace”. Many of us have principles, especially around justice and peace, but opt to live them out by, for example, giving money to Cafod. Some, though, feel drawn to take it much further and the woman sitting opposite me in Pax Christi’s modest north London offices, part of a complex housing church organisations and a primary school near the North Circular Road, has certainly gone that extra mile.

Having a criminal record – even in a good cause – has lifelong consequences, in terms for example of insurance or getting visas to travel to other countries. “You are making a life choice when you go down that route,” she acknowledges. “But I haven’t paid a price for it as others have. I have had colleagues and friends in professions like nursing who risked their jobs by taking part.”

Gaffney isn’t keen, she makes clear, on any description that makes her sound exceptional. Small of stature and softly spoken, she weighs her words carefully, though occasionally breaks into a laugh that sounds a bit like hiccups (in 2012 a national newspaper included her in its list of “100 Happy People”). There is no piety or solemnity about her, but rather an admirable, if lightly worn, inner steel.

“All this stuff about being a prisoner and all that, I don’t like it, because it is just a tiny bit of something bigger,” she says. The annual Ash Wednesday protest has now been happening for 36 years – starting at one of those peak times of anti-nuclear activism in the early 1980s. What, I wonder, does she think it has achieved?

“It has changed the attitudes of the police, in the sense that there are no arrests now. There is engagement instead. It is almost as if we have claimed a right to be there. Whatever was perceived [by the authorities] as threatening in the past is no longer perceived as threatening.”

But what about changing policy? The world still has nuclear weapons. Indeed, with Donald Trump and Vladimir Putin among those at its helm, it seems today to be heading in the wrong direction, with the United States (backed by the British government) withdrawing from the 1987 Intermediate-Range Nuclear Forces Treaty.

“Whether our witness has done a jot with Ministry of Defence or government policy, it is the same as with much of our work in this area of war and peace,” she argues. “Mostly what we are doing is trying to stop things being worse. Things would be a lot worse if we weren’t doing what we do. It’s about keeping things on agendas, not letting things become hidden, keeping levels of accountability going, and keeping questioning going. You are not going to win many things en route. It is about persistence.”

And that is the key word for Gaffney, not only to describe her work at Pax Christi – with its 1,800 members and similar number of supporters, many of them parish groups – but more broadly in the context of the organisation’s often under-the-radar faith-based campaigning and education work around issues such as the international arms trade.

“It is one of the things that I feel – well, not proud of – but we have managed to be consistent in that for 36 years we have had a presence at the Ministry of Defence on Ash Wednesday,” she says. “It is a sign of faithfulness that one keeps doing things because it is important. The problem hasn’t gone away. We keep coming back to address it.”

Her own involvement with peace activism started as a young woman in the late 1970s in her home parish in Hillingdon, north-west London. She had grown up in an “Irish-Scottish Catholic” home, attended the local church primaries and secondaries, and gone on to train as a biology and RE teacher at the old Maria Assumpta Teacher Training College in Kensington Square.

“I wanted to get my parish involved in supporting [the peace camp at] Greenham Common,” she recalls. It set her life on a new course. After six years as a classroom teacher (in her old school), she left, retrained and got a job at Cafod in 1980, in its education department. Nine years later she became general secretary of Pax Christi.

It was a typical discreetly bold step – from a well-resourced, well-loved, parish-friendly organisation to somewhere with just two members of staff, nothing in the bank, and often an irritant to the bishops’ conference, which backed a softer multilateral disarmament line.

“The more I had been looking at poverty and migration at Cafod as issues in development work,” she explains, “the more I came to see the role of war and conflict as a crucial push factor. If we don’t get to the root of war and conflict, the other things are just going to keep rolling on.”

Did she ever regret her switch? “Pax Christi was in a very fragile state when I arrived,” she remembers, “and I think I cried every day for a year, because it was really tough. There was so much to do. But they were not tears of regret, but tears of, ‘What am I doing? Can I stick it?’ And I did, because of the amazing supporters we had and have at grass roots, and at international level. We may be small, but we are part of something bigger.”

It’s back to persistence. One of the reasons that Gaffney feels this is a good time to hand on the baton – her successor was named before Christmas as Theresa Alessandro – is that finally, finally, the argument about nuclear deterrence and the arms trade is heading back up the political, public and church agenda.

“People are increasingly seeing through the scandal of the arms trade,” she suggests. “With what happened in Iraq, Afghanistan, and then Iraq again, people have observed what Pope Francis has called this ‘rolling war’, and they have recognised that, as a country that manufactures arms, we are a major part of that problem.”

What about the potential impact on jobs, though, if we were to stop making warplanes and weapons? “Those involved in the green economy and the ‘Green Deal’ have come up with fantastic ways in which the aeronautics industry, for example, could be looking at non-carbon energy resources. There is a huge amount of work being done about how you could protect those industries that manufacture arms, use their resources and technology, turn it round.”

It is a distraction from the real issue, she insists, which is foreign policy, and the status that Britain derives on the world stage from being a military power and an arms manufacturer. “We don’t want to lose that. So much so that we even use a member of our own royal family, Prince Andrew, to promote our arms industry. It is scandalous.”

Her optimism about the debate shifting has been considerably boosted by the advent of Pope Francis and a whole new approach in Rome. “I took part in 2016 in an inspiring gathering, co-ordinated by Pax Christ International and the Vatican, where 80 people from 34 countries – theologians, pastoral workers, practitioners, peace workers – discussed how to move the Church to a greater understanding and commitment to what gospel non-violence is about.”

The result, the Catholic Nonviolence Initiative, is more, she stresses, than fine words. “It’s about committing to the practical things that are needed to make peace happen: persistence, diplomacy, advocacy, investment in mediation, and in root causes and in skilling up non-violent peacemakers.”

While she has only praise for the work of the new Dicastery for Promoting Integral Human Develop-ment, and its prefect, Cardinal Peter Turkson, she feels there is more that the English and Welsh bishops could do to catch up with the Vatican’s lead. But that will be a job for her successor.

In 2005 Gaffney was among a group nominated for the Nobel Peace Prize, but she says she counts as her greatest achievement – though she recoils slightly from the phrase – her role these past 29 years in sustaining the “peace community” in this country.

“People who feel confident in belonging to something, and feel resourced, supported, and encouraged, are then able to keep going,” she says.

It is, of course, far too modest as an assessment. And like many others who dedicate their working lives – and much more – to church organisations run on slender resources that ask uncomfortable questions we often would rather not hear, Pat Gaffney’s prophetic persistence these past three decades in the cause of peace has come at a cost to her private life. Not that she sees it that way. “I’d turn it the other way round,” she corrects me. “Because I am single and don’t have a big family, I have had the freedom to do this. That for me is a luxury.”

This year Peace Sunday is on 20 January. For further information, visit www.paxchristi.org.uk.