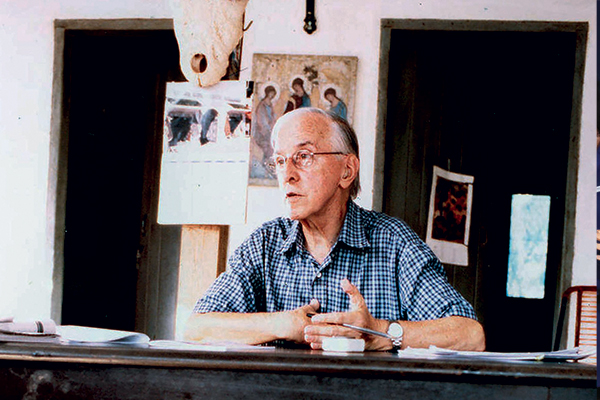 In the poetry of the liberation theologian and bishop Pedro Casaldáliga, Mary of Nazareth is transformed from a pale-skinned virgin, with her eyes lowered in submission, to everywoman responding to God’s word of liberation

Two months after the death of Brazil’s liberationist bishop, Pedro Casaldáliga, on 8 August, Latin Americans were sharing a “virtual spiritual visit” to the holy man’s town of São Félix do Araguaia in the central state of Mato Grosso.
We could zoom in on Google Maps and click on photos of the pilgrimage spots. There is the simple catedral with its dramatic mural of the Resurrection by Maximino Cerezo Barredo – the Risen Christ leading a multiracial group as they carry the Cross – and Dom Pedro’s humble home is four blocks to the west, with its bare brick walls plastered with photos of Che Guevara, Hélder Câmara, Oscar Romero, Francis of Assisi and Jesus.

Then there is the Tía Irene Auditorium where his funeral was completed with a dance by Karajá indigenous and watched by thousands of people online, and from where his body was borne on shoulders to its burial place on the banks of the River Araguaia, between the graves of a farmhand and a prostitute. These words mark the spot: “For my resting place I only want this wooden cross, with the rain and the sun, these seven handspans of ground, and Resurrection!”
I met Casaldáliga at a Brazilian base-­community congress in Duque de Caxias in 1989, and his sensitivity to simple people confirmed to me in the briefest of conversations that I was probably talking to a saint. He was also a poet.
According to the Jesuit Victor Codina, he was once voted for an honorary degree by the theology faculty of a European university, until higher authority vetoed it, declaring he was not a theologian, only a poet. This stuffy view of theology would probably not be accepted nowadays. Liberation theology has become so mainstream (everywhere but in the Vatican, Pope Francis excepted) that almost everyone is claiming they are doing it.

So was Casaldáliga a theologian? If we look at his Mariology, I think we can say he was, and what is so interesting is that it evolved out of such thoroughly traditional Catholic roots. “I am passionate about Mariology,” he wrote in the introduction to his 1975 anthology, El Credo que ha dado sentido a mi vida. (Although he lived in Brazil from the age of 40, he was born in Catalonia, and he published poems in Portuguese, Spanish and Catalan.) “A golden book, a milestone in my Marian journey, was the little work by Hugo Rahner, Our Lady and the Church.”

Intrigued, I looked the book up in the Bodleian Library: it was published in 1951 in German, 1961 in English. “Mary is simply the great symbol of the Church,” says Rahner, and “the Church is ‘Mary in the world’.” By this he means that anything said about Mary is true by virtue of it being an attribute of the Church: for example, the Church is our mother, the Church is glorious, the Church is immaculate. But since the sexual abuse scandals, talk of mother Church has somewhat waned, and no one would any longer dare to describe the Church as glorious, let alone immaculate. So how did Casaldáliga get from this preconciliar theology to the ­radical Mariology he presents in his poems?

The key, I believe, is in seeing the Church as the People of God. Once that is recognised, Mary of Nazareth does not get shut up in being a pale-skinned, veiled virgin, dressed in blue, with her eyes lowered in submission, but becomes anyone receptive to hearing God’s word of liberation.

So Casaldáliga, influenced as he freely admits by the new theology after the council, and by “the Christian experi­ence of social struggle”, found that his “faith in Mary was being stripped down, to something freer and truer. She became more and more, in my thought and in my heart, the singer of the Magnificat, the prophet of the liberated poor.”

That is why we see in his poem “María de nuestra liberación” (1983) that Mary of Nazareth is not only the “premature bride of Joseph the carpenter” and “villager from a suspect settlement”, but is also:

Later in the same poem, he speaks of how we are called to walk and to sing with this Mary:

Teach us to carry that true Jesus …
To cousin Elizabeth.

And to the face of our stricken peoples who, despite everything, are waiting for him.

Our Mary of the Magnificat,
We want to sing with you,
Mary of our Liberation!

Her message of proclamation, in the “Magnificat of the poor”, is paraphrased like this (“Canta-nos teu Magnificat”, 2005):

shatters capital, missiles and misery,
fills poor humanity with the good things
of the Reign
and sends the accumulators away naked
into the reign of darkness …

After the Visitation comes the Exile, and the life of a refugee is something she shares with many today (“Comadre de suburbio”, 1965):

There was no room in Bethlehem, there

was no room in Egypt;
And there is no room in Madrid, for you.
Joseph will be forced into unemployment
for many days …
The Nile will daily waste away your skin
and the beauty of your anonymous
hands …
And the Child will grow up with no more
schooling than the lessons of the sun
and of your word.

But lessons from Mary are by no means second best (“Oración a Nuestra Señora del Tercer Mundo”, 1975):

Peasant woman, working-class woman …
Teach us to read the Gospel of Jesus with
sincerity
And to translate it into life
With all its revolutionary consequences.

With the growing tam-tam of my Bantu
passion
I greet you, Black Woman, divinely
beautiful …
There are three-hundred-million black
people who are waiting for you, with
their flags waving,
In this green country of Hope …
Rocked in your lap, where God goes to
sleep with our dreams,
All Africa is pulsing with the rhythm of
the cradle.

Casaldáliga is also known for writing the words of two sung liberation Masses. The Missa da Terra Sem Males of 1979 was inspired by the Guaraní people, whose culture always held the concept of a Land Without Evil, while the second Mass, the Missa dos Quilombos of 1982, explored black liberation, because a quilombo was a settlement of escaped slaves. The Mass was written jointly with Pedro Tierra and set to music by the black Brazilian singer Milton Nascimento, at the request of the saintly Bishop Hélder Câmara. It was first celebrated in front of the Igreja do Carmo in Recife, on the site where the head of Zumbi, a leader of runaway slaves, was displayed on a pike in 1695, after the fall of the Palmares quilombo, 65 miles away.

The songs became popular but the Quilombos Mass was banned by the Vatican until the meeting of Latin American bishops in Santo Domingo in 1992, when an agreement on inculturation was negotiated that effectively enabled its celebration again. A high point of the original Mass was Hélder Câmara’s passionate Invocation to “Mariama”, a form of “Mary” used in West Africa:

“Of course they will say, Mariama, that it’s politics, that it’s subversion, that it’s Commu­nism. It is the Gospel of Christ, Mariama …
“Mariama, Our Lady, Dear Mother, it isn’t necessary to go as far as in your hymn. It isn’t necessary for the rich to go empty-handed and the poor with their hands full.
Neither poor nor rich. Nor for today’s slave to be tomorrow’s slave-master. Enough of slaves.”

Inspired by the African name Mariama, Casaldáliga included a Louvação à Mariama (“Praise to Mariama”) in the Mass, and another songwriter, María Cecilia Domezi, composed the well-known and highly singable Negra Mariama, which links up the black Madonna figure of Aparecida (Brazil’s ­principal Marian shrine) with the call of Mariama for the enslaved to set themselves free and dance the samba, overthrowing landowners from their thrones.

Meanwhile, official theological discussions on Marian thought have tended to focus on historic Protestant/Catholic differences, with Protestants politely maintaining that the gospel evidence about her is fragmentary and ambiguous, and Catholics tied into defending their doctrinal statements. These discussions can be somewhat sterile, and they have been overtaken by increasing interest in Mary of Nazareth from Protestant women.

A group of 32 women from 16 Asian and Pacific countries at a conference in Singapore in 1987 declared that we must “rescue Mariology from the control of Catholic male celibates, and hear the voices of women, both Protestant and Catholic”. For these women, “the Magnificat is the rallying point for ecumenism, as Christians join together working to liberate the poor and all victims of injustice. It is the liberation song of women”.

When the poetry of one Catholic male ­celibate, Pedro Casaldáliga, becomes more widely known, his theological contribution will be seen to have more and more relevance for the future.

Margaret Hebblethwaite is currently writing a book about Mary of Nazareth in the New Testament.