'The tongue, brothers and sisters, can destroy a community by speaking badly about another person' 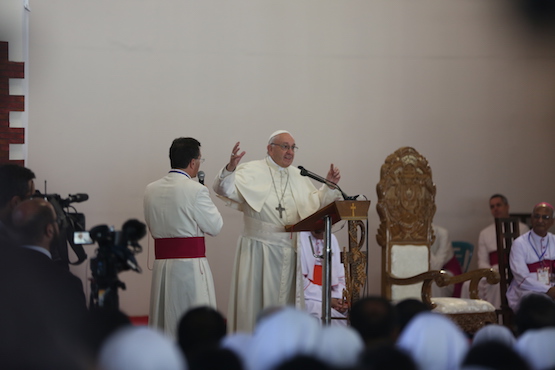 Pope Francis speaks before religious men and women during the last day of his three-day trip to Bangladesh. (Photo by Joe Torres/ucanews.com)December 2, 2017

Pope Francis has compared the mentality of religious men and women who engage in gossip to that of terrorists.

He elaborated that such people are “enemies” of religion.

The pope was speaking to men and women religious and seminarians in the Bangladeshi capital, Dhaka, towards the end of a three-day visit to the populous Muslim-majority nation.

The pope departed from a prepared speech and spoke extemporaneously in Italian, which was translated into English to the delight of his audience.

Pope Francis likened the life of a religious in developing wisdom, faith and service to a growing plant.

“God sows the seed, and God is the one who provides for its growth,” said Pope Francis.

Nonetheless, the religious vocation had a role to play in tending to spiritual needs akin to the care of a child or a sick person.

The pope then spoke of the tendency of priests, nuns, and the religious to gossip.

“The tongue, brothers and sisters, can destroy a community by speaking badly about another person,” said Pope Francis.

The pontiff added that talk about others behind their backs could result in distrust, jealousy, and division.

Gossips, like terrorists, acted in a clandestine way without publicly declaring themselves.

“A terrorist says it in a private, crude way, then throws the bomb and it explodes,” said the pope.

Gossips would do well to hold their tongues, he added.

“How many communities have been destroyed through the spirit of gossip?” Pope Francis asked his audience rhetorically.

Speaking for about 15 minutes, Pope Francis also expressed admiration for elderly priests, bishops, and nuns whom had “lived a full life.”

The pope, however, said it is personally painful when he sees priests, consecrated people, and even bishops, who are not happy.

He described them as having a “vinegar face” and a “soured face” because they only worried about recognition and always tried to compare themselves to others.

“There is no joy in that way of thinking,” said Pope Francis.

Rather, there was much to be achieved through prayer.

“To pray means to ask the Lord to look after us, that he give us the tenderness that we have to then pass on to others,” the pope said.

“It was an auspicious moment for me to listen to the words of the pope,” said Brother Rozario, who also teaches English at St. Paul’s School in the Diocese of Khulna in the southern part of Bangladesh.

Brother Rozario traveled for almost ten hours from his diocese to meet the pope.

His effort was rewarded when he was seated very close to the pontiff.

In his address, Pope Francis reiterated his admiration of Bangladesh’s example in promoting interreligious dialogue and harmony, something that he said should also be practiced in religious communities.

Pope Francis ended his visit to Bangladesh by meeting young people at Notre Dame University, the only Catholic university in the country.