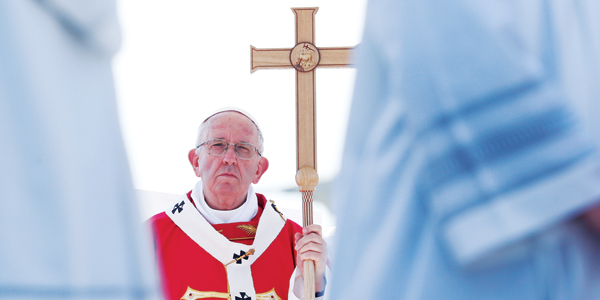 We are witnessing something quite remarkable in the modern history of the papacy. Consider what has transpired in the five-and-a-half years since Jorge Mario Bergoglio was elected pope, taking the name Francis.

Four cardinals (two now deceased) submitted a dubia (a quest for clarification on a matter of doctrine), implicitly challenging the Pope’s orthodoxy; the Prefect of the Congregation for Divine Worship and the Discipline of the Sacraments, Cardinal Robert Sarah, openly contravened the stated wishes of the Pope regarding liturgical reform, and was chastised for it by Francis in public; a retired senior papal diplomat, Archbishop Carlo Maria Viganò, publicly accused the Pope of complicity in the cover-up of (now) Archbishop Theodore McCarrick’s harassment of seminarians and priests, and called for his resignation; and several bishops spoke of the “integrity” of Viganò – without any endorsement of the Pope’s probity – and called for an investigation of the role of the Vatican – including the Pope – in the covering-up of clerical sexual abuse.

While many bishops have raised their voices in support for the Pope, many others have been content to simply wait out this papacy in silence.

The challenges to Pope Francis by several among those closest to him represent a thinly-veiled attempt at something close to a palace coup. They are encouraged by a small but well-organised and vocal minority of Catholic individuals and organisations who have grasped the real meaning of this papacy: Francis is the Pope who might finally achieve the vision of the Second Vatican Council.

Many Catholics, including many of his supporters, have failed to appreciate the depth and significance of Francis’ reforms. They love Francis – they love his simplicity, his smile, his gentle spirit, his “revolution of tenderness” – but they miss the more substantive transformation of the Church that he is pursuing. His enemies don’t. And they are determined to stop him.

Pope Saint John Paul II and Pope Benedict both attended Vatican II, one as bishop and the other as theologian; its teachings, Pope John Paul once insisted, are to be “a sure compass” for the Church. Both furthered elements of the Council’s teaching; John Paul II, in particular, developed the Council’s theology of the laity – although, with the encouragement of his chief lieutenant, the then-Cardinal Joseph Ratzinger, he also promoted a pronounced re-sacralisation of the ministerial priesthood and hardened the distinction between the laity and the clergy.

Like his predecessors, Pope Francis has also drawn on the teaching of the Council, but in a much more consistent and comprehensive manner. He has understood that Vatican II’s rejuvenated theology of the laity can only be grasped within the Council’s more profound baptismal ecclesiology. That ecclesiology did not begin with a consideration of the distinct spheres of the laity and clergy but with the priority of one’s baptismal identity as Christifidelis, the Christian faithful.

Francis has time and again emphasised the Council’s teaching that all the baptised possess a spiritual instinct for the faith, a sensus fidei (Lumen gentium, 12), which can contribute much to the life of the Church. This retrieval of the Council’s teaching is central to his call for a synodal, listening Church.

This Pope has taken to heart the statement of the late Belgian Cardinal Leo Suenens, an influential prelate at the Council: “Every pope should remember that the most important day of his life was not his papal election but his baptism.” His focus is not on the secular vocation of the laity but on the call by baptism for all to become “missionary disciples”. And this leads to another feature of his reformist vision.

The Council taught that the Church was missionary by its very nature (Ad Gentes, 2). A Church constituted by mission is a Church that lives as a sacrament of God’s saving love before the world. Francis understands that such a Church cannot live from a position of security, power and control, but only in vulnerable accompaniment with the broken and wounded of this world.

Such a Church will be “bruised, hurting and dirty because it has been out on the streets, rather than a Church which is unhealthy from being confined and from clinging to its own security” (Evangelii Gaudium, 49). This remarkable commitment to ecclesial vulnerability is further illuminated in Francis’ startling image of the Church as a “field hospital”. Such a Church does not carefully assess its resources or calculate the probability for the success of its pastoral initiatives; it simply responds to those in need with whatever resources it has at its disposal.

To appreciate the full implications of a “field hospital” Church, vulnerably serving the broken of this world, one simply has to ask one question: what is the real scandal underlying the sexual abuse crisis? Is it not the actions of Church leaders more concerned with securing the Church’s reputation than with vulnerable solidarity with survivors of abuse?

The Second Vatican Council’s baptismal ecclesiology included a recovery of a much-neglected biblical theme, the priesthood of all believers. It consistently oriented its theology of the ministerial priesthood toward authentic pastoral care and service of the baptised. The priest is not to extinguish the Spirit but rather should identify, test and empower the gifts of all the baptised (Apostolicam actuositatem 3, Presbyterorum ordinis, 9).

In contrast to the re-sacralisation of the priesthood of his two immediate predecessors, Francis has once again taken a neglected conciliar theme and made it central to his reformist vision. He has condemned arrogant priests who act like “little monsters”, insisting that they humbly serve God’s people.

In one of the most important speeches of his pontificate, in October 2015 Francis spoke of the Church as being like “an inverted pyramid” in which the “top is located beneath the base”. The ministers, who are situated at the conventional “top” of the pyramid, are in fact “the least”, who must serve the base, all God’s people, by imitating Jesus’ washing the feet of his disciples.

Francis’ response to the scourge of clerical sexual abuse crisis has been tardy and sometimes flatfooted. He has been slow to grasp what is at stake. His initial accusation of calumny levelled against the Chilean abuse survivors risked undermining his entire pontificate. Nevertheless, he had the courage and humility to apologise. He flew the Chilean survivors to Rome to hear their story. He called the entire Chilean bishops’ conference to Rome and, having received letters of resignation from 28 of them, eventually accepted five, with perhaps more to come.

Once he was informed of the credible accusation of abuse of a minor made against Cardinal McCarrick, he asked for his resignation as a member of the college of cardinals and ordered him to live the rest of his days in a life of prayer and seclusion. He met with abuse victims during his recent visit to Ireland and, in a moving act of penitence, implored forgiveness for “the abuse of power, the abuse of conscience and sexual abuse on the part of representatives of the Church”. He has also written a pastoral letter to “the people of God” that calls for both personal and ecclesial conversion and for “solidarity” with the victims of abuse “in the deepest and most challenging sense, to become our way of forging present and future history”.

In that letter, Pope Francis identifies as a key factor in the abuse scandal the disease of clericalism, which is “an excision in the ecclesial body that supports and helps to perpetuate many of the evils that we are condemning today”. The condemnation of clericalism lies at the heart of his call for ministers who “have the smell of their sheep on them”. It also stands in stark contrast to those Catholics, including prelates such as Viganò and the Bishop of Madison, Wisconsin, Robert Morlino, who blame clerical sexual abuse on a “gay culture” in the priesthood.

Another theme in Francis’ reformist vision is subsidiarity, a principle drawn in substance from the Council. The ecclesial application of that principle might be put as follows: pastoral decisions should be made at the local level unless the issue cannot be effectively addressed at that level or it pertains to matters of great import for the universal Church. The Council had something like this principle in mind in its recognition of the considerable authority of local bishops who were not “vicars of the pope” but rather the ordinary pastors of their churches Lumen Gentium, 27). It was also reflected in the Council’s decision to grant episcopal conferences considerable authority in liturgical matters (Sacrosanctum Concilium, 22, 36). This commitment would be substantially reversed during Pope John Paul II’s long pontificate.

Here, yet again, Pope Francis has taken up the Council’s teaching and given it a new impetus in his call for a programme of “decentralisation” of authority in the Church (Evangelii Gaudium, 16). We see this in the apostolic letter Magnum Principiam, which returns primary authority over liturgical translations to bishops’ conferences. It is also evident in his expressed openness to the possibility of ordaining married men to the presbyterate, a move, he has suggested, that should come in response to calls from the local churches rather than be initiated by the Vatican.

In many ways, Francis’s response to the protracted resistance to curial reform has been to enact the principle of subsidiarity. If he can’t reform it, he can at least redirect decision-making away from it and toward synods, episcopal conferences and the local churches themselves.

Differences and disagreements are not to be feared or artificially smothered; they are a sign of passionate discipleship. And bishops in the Church, including the Bishop of Rome, are not above scrutiny and criticism. In our media-saturated age, no pope can hope to lead effectively without incurring excoriating criticism.

But many of Francis’ critics are resisting his leadership and even calling for his resignation because they discern in his papacy the bold, reforming vision of Vatican II, to which they may pay lip service but would prefer to see emasculated. The success of this pontificate likely represents the last, best chance for decades to come for the decisive realisation of the vision of Vatican II. The stakes could scarcely be higher.

Dr Richard R. Gaillardetz is the Joseph Professor of Catholic Systematic Theology at Boston College and a former president of the Catholic Theological Society of America.