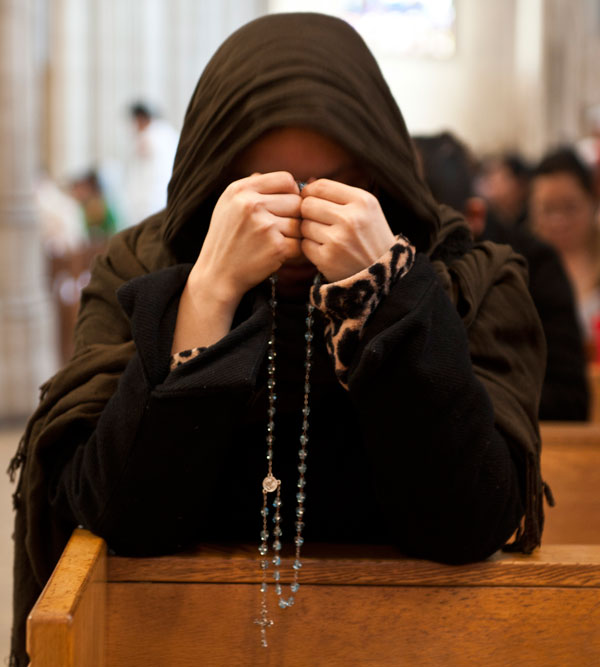 A man prays the rosary during the World Day of Prayer for Migrants on Sunday 15 January
Photo: Mazur/catholicnews.org.uk

Does God lead people into temptation? Not anymore, at least if you’re a Catholic in France, Spain, or - as of this week - Italy, where the Bishops’ Conference has approved (with Pope Francis’ blessing) a translation of the Our Father that wrestles the blame for sin away from God, and into the world.

The subtle change - from “lead us not” into “do not let us fall” - is an exegetical sleight of hand that has caused theological uproar, bringing on bewilderment in the broadsheets and forging an unlikely alliance between Traditionalist Catholics and Protestant literalists.

Super-Calvinist John Piper, for example, has accused the Pope of “reading the Bible upside down”, arguing that God does routinely lead his children into temptation. Discomfort with this is an attempt to make God palatable, to try and bring him into line with 21st century norms. US-based Msgr Charles Pope takes up this baton for the National Catholic Register: “The purpose of trials and temptations for us is that we grow by facing down opposition, error and sin, and by exhibiting obedience to the commandments of God,” he writes.

The row boils down to a small - and fairly unambiguous - word in the Greek translation of Matthew and Luke. That word, eisenegkes, means being brought from one place into another. Both Matthew and Luke use the irregular aorist form of eispheró to give a sense of being led into, so Jerome was undoubtedly correct, in the Vulgate, to render Matthew “ne inducas nos in tentationem” [do not lead us…], and Luke in a similar way.

But this has not stopped the Church from parsing this sentence for millennia, with the recently-approved Italian (and, let it be noted, the French and Spanish) translation the latest contribution to a long-running debate. As a very excellent 2018 article in Commonweal makes clear, even Tertullian had a problem with God leading us into temptation, adding as commentary in De Oratione: “id est, ne nos patiaris induci” - “that is, do not allow us to be led”. St Augustine says outright: “Many people in their prayers, however, say it this way: ‘and do not allow us to be led into temptation.’”

Catholic commentator Peter D Williams makes the excellent point in a blog for Premier Christianity that, really, the problematic word is peirasmos, which Jerome translated as temptation, but probably (and outside New Testament Greek) is closer to trial or test. A more accurate translation, then, could be “do not lead us into trials/tests”: as Williams argues, perhaps the wrong word has been changed.

Where we land is more a theological debate than an exegetical one: the real question is does God use evil to test us? Dr Meredith Warren, a lecturer in Biblical and Religious Studies at the University of Sheffield, argues in a very skillful blog for The Conversation that he does. Citing the obvious Old Testament examples of Job and Abraham, she writes: “In attempting to remove any implication that God has some hand in evil, the Pope overlooks the many biblical examples where God works with Satan to test his followers [...]  A more consistent understanding of God actually requires that wording, begging God not to lead a worshipper into temptation.”

But what about the New Testament? Does Jesus test the love of the woman who anoints him with her tears (a story that appears in all four gospels), or of the thief on the cross to whom he promises paradise? A number of writers cite Jesus’ temptation in the desert as an example of a trial from the Father; but as Joseph O’Hanlon, writing in The Tablet this week, points out: “Jesus was in the desert ‘being put to the test by Satan’”, a test that proved “he was equipped by the power of God”.

Piper is right that we shouldn’t force God into a human template; but surely Jesus’ own question, in Matthew and Luke, “how much more will your Father in heaven...”, gives us leave to read fatherlike love as we know it upwards to God? And do good parents test their children to find out if they love them? Mgr Pope says we prove our obedience by passing God’s tests. But we were never called to be rule-followers, we were called to be lovers.

I suspect - and a quick poll of The Tablet’s editorial office confirmed this - that when Christians pray the Our Father in the current translation, all this nuance is present. One day we might mean to ask God for the strength to overcome a particular temptation, then the next we might ask to be spared seeing a loved one suffer. “Lead us not into temptation” can mean all these things.

But does it have the same gentle ambiguity for a non-Christian or a convert? We are constantly told we live in a religiously illiterate society, and if we do, the Church can no longer rely on a bedrock of Sunday School classes and school hymns to iron out its exegetical creases. The new Italian translation makes it clear to everyone, churched or unchurched, that God is a lover, not a trickster; a father, not an examiner. And that is why Pope Francis is exactly right to give it his blessing.

Liz Dodd is The Tablet's home news editor and studied Theology at the University of Cambridge.