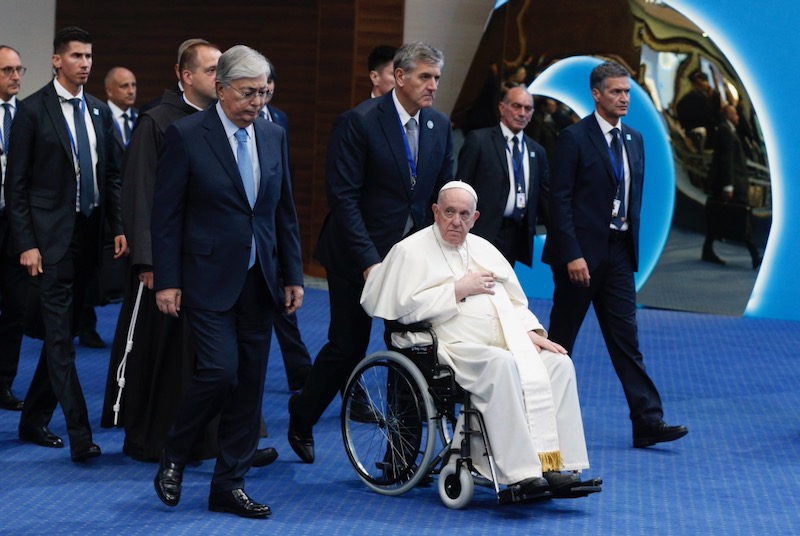 Pope Francis and Kazakh President Kassym-Jomart Tokayev, left, arrive for the reading of a final declaration during the conclusion of the Congress of Leaders of World and Traditional Religions at the Palace of Peace and Reconciliation in Nur-Sultan. CNS photo/Paul Haring

On 15 September at the two-day 7th Congress of Leaders of World and Traditional Religions in the Kazakh capital Nur-Sultan, Pope Francis used his concluding address to the 100 delegations from 60 countries to make a profound and impassioned plea for world peace.

Acknowledging, without naming Ukraine, that he was speaking against a background of “the utter folly of war”, he told the attendees that the motto for his visit, “Messengers of Unity and Peace” was deliberately in the plural because “all of us are on a common journey”.

It was providential, he said, that the Congress was coming together “to reaffirm the authentic and inalienable essence of religion”. “Extremism, radicalism, terrorism and all other incentives to hatred, hostility, violence and war, whatever their motivations or goals, have nothing to do with the authentic spirit of religion and must be rejected in the most decisive terms possible,” he said, reiterating the words of the Seventh Congress Declaration.

He then explored the relationship between politics and religion, using the symbolism of the Kazakh flag. “If the golden eagle displayed on that flag speaks of earthly authority and ancient empires, the blue background evokes the colour of the sky and thus transcendence,” he said. These spheres were “distinct but not …separate”. There must be “a free space open to the infinite and not straitened by earthly power”, while transcendence itself “must not yield to the temptation to turn into power, lest heaven fall to earth, the eternal ‘beyond’ be chained to an earthly present, and love of neighbour become prey to partisan decisions.”

In a subtle exposition of the manner in which politics and religion must interact he said: “No”, then, to confusion between politics and transcendence, but “no” also to their separation, for the highest human aspirations cannot be excluded from public life and relegated solely to the private sphere.” Defending the universal right to religious freedom, he used lyrical imagery from the Kazakh national anthem, describing Kazakhstan as “a sky of golden sun”. The same is true of each human being, he said. “In their absolute uniqueness, if they are in contact with the divine, every man and woman can radiate a special light in our world.”

This platform of ideas then allowed the Pope to explain how the overall good of humanity should be considered ahead of “strategic and economic objectives, national, energy and military interests, and in advance of crucial decisions”. Making truly great decisions, he said, means looking to “children, to young people and their future, to the elderly and their wisdom, to ordinary people and their genuine needs”. Individuals cannot be “reduced’ to what they produce and earn, he pointed out. And the family is the protector of this truth: “The family, a word that in the Kazakh language means “nest of soul and love”, is the natural and irreplaceable reality that must be protected and promoted, so that tomorrow’s men and women may grow and mature.”

He concluded referencing three key words for the Congress.

“Peace” he said was the goal of the Congress and humanity itself. “Peace! Beybitsilik, mir, peace!” He exclaimed. “Beybitsilik” translates as peace in Kazakh; “mir” translates as peace in both Russian and Ukrainian. His second word was “women” because “women bestow care and life upon the world: they are themselves a path towards peace”. “How many calamitous decisions might have been avoided, had woman been directly involved in decision-making!” He said.

Thirdly, he referred to young people. “They more than anyone else, call for peace and respect for the common home of creation. The ingrained attitudes of domination and exploitation, the hoarding of resources, nationalism, war and carving out spheres of influence shape an older world, which the young reject,” he said “Let us build a world with them in mind!”

In closing remarks at open-air mass in Nur-Sultan, the Pope appealed for a return to negotiations, in the conflict between Russia and Ukraine, as well as the one that flared again in recent days between Armenia and Azerbaijan.

“The one solution is peace and the only way to arrive at peace is through dialogue,” he told a gathering of thousands of congregants who had traveled to the city from all over Kazakhstan.