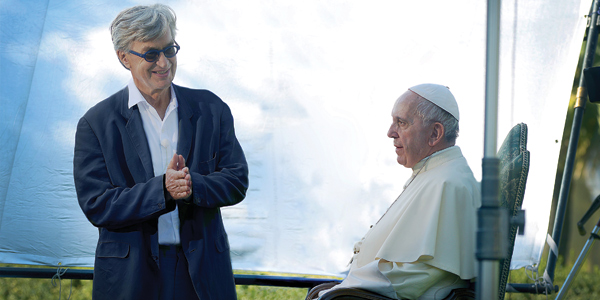 When the helicopter carrying Pope Benedict XVI on the day he left office was shot swooping away from the apostolic palace in the Vatican and then rising high above the domes and towers of Rome, the then Monsignor, now Bishop, Paul Tighe, commentating for the BBC, couldn’t help exclaiming: “This is like Fellini!”

In fact the dramatic footage was the brainchild of Mgr Dario Edoardo Viganò, a movie buff who had recently been appointed director of Vatican Television. Viganò’s career at the Vatican, like the helicopter, rose higher and higher, with Benedict’s successor, Francis, appointing him Prefect of the new Secretariat for Communications, until it crashed with his resignation over a public relations fiasco. But in the small print at the end of Wim Wenders’ new documentary on Pope Francis there is a credit to Viganò for helping to get the film produced. In doing so, he has enabled Wenders to create a film of significant insight into Francis’ pontificate – albeit with some irritating flaws and omissions.

That mention of the film director Federico Fellini by Paul Tighe referenced a helicopter flight in La Dolce Vita, a movie that conveyed both the beauty and elegance, and the decadence and corruption of Rome. The same could be said of Wim Wenders’ account here of the Vatican. But there is much more, too, for this is a narrative dominated by Francis’ deeply attractive character.

It is not particularly revelatory or insightful for those already well versed in the story of Francis’ five-year pontificate. Rather, it confirms some of the instinctive response many of us felt on that March evening in 2013 when the former Cardinal Jorge Mario Bergoglio from Argentina stepped on to the balcony of St Peter’s Basilica after the white smoke signalled his election.

The footage is included here: how he shyly says “Buona Sera” to the thousands in the square below, and jokes that the cardinals had gone “to the ends of the Earth” to find a Bishop of Rome. Those of us watching in the square, via TV or online, realised that this was a man of authenticity, humility and humour. In the years since, while those qualities have been evident, there have also been frustrations: Francis’ promised reforms of the Vatican seem slow in coming to fruition; women remain almost entirely excluded from power in the Church; and, most importantly of all, the abuse crisis seems to loom as large as ever.

There is little of all this in Wenders’ documentary, apart from one toe-curling scene of Francis addressing the Roman Curia, shown immediately after he is heard saying: “In the Church there are men still yielding to the temptation of wealth.” Everything that is wrong with the Church is evident in this gathering of the Curia: row after row of identikit, comfortable, complacent elderly cardinals.

One can sense many of them squirming as Francis warns them of the dangers of what he calls “spiritual Alzheimer’s”. Perhaps they deserve their ticking off, but one can see why this particular Alex Ferguson-style hair dryer treatment may have something to do with Francis’ failure to secure their wholehearted co-operation in Curial reform.

The documentary mostly consists of knitting together existing Vatican footage of the Pope with shots of him talking directly to camera, as if he is looking the cinemagoer in the eye. It’s a simple but fetching technique. But for those who know little about Francis’ background – his migrant Italian family or his time as a sometimes controversial leader of the Jesuits in Argentina – or about the Catholic Church, there is little effort to fill in the gaps. There is no account of why there was a conclave in 2013 or how one works. And there is just one clip of Argentina, showing the then-Archbishop Bergoglio speaking affectingly to the crowds in a Buenos Aires street in 1999.

Instead, what Wenders explores is a clear connection between Francis and the saint whose name he took and whom Wenders, a cradle Catholic who is now a practising Protestant, admires so much: Francis of Assisi. This leads him to devote a considerable amount of time to what Francis has to say about the poor and those on the margins of society, and on the environment.

Some of the most powerful moments come when Wenders cuts from the Pope saying “Poverty is at the centre of the Gospel” to scenes of him in a migrant camp in Rome, in a favela in Brazil, in Naples, in Lesbos talking to refugees, in the Central African Republic meeting mothers and their sick children in a hospital, in prisons in Italy and in the United States. His tenderness towards the most vulnerable is deeply moving; as he strokes the face of a dying child, a tear rolled down the cheek of this hardened journalist, just as it does down those of several prisoners when he speaks to them, offering hope of God’s mercy. In Bolivia his concern for the poor is interwoven with his love of God’s Creation and his awareness that materialism, consumerism and contempt for the planet are doing so much damage to both the Earth and to the poorest of society. “Where money rules”, he says, “the economy is killing Mother Earth.”

Francis’ concerns are often akin to his namesake’s, and the weakest aspect of this documentary is the attempt to make a distinction between the two by Wenders showing scenes, supposedly of the medieval saint with his followers, in wobbly, black-and-white footage. A hammy actor looks up dreamily to the heavens and then scratches away with a quill pen writing the words that Pope Francis uses to open his encyclical on the environment: Laudato si’ – “Praise Be”. The place for that should have been the cutting room floor.

There is nothing so corny in the footage of the Pope. Although he is as animated as an old leftie politician in his denunciations of capitalism, there is no sense of him merely going through the motions that is often so evident when the political classes meet the people.

But there is a stiffness about him when he meets the global elite: the Trumps and Putins of this world; the waxworks, as Prince Charles famously put it, from China, who listen unblinkingly at the United Nations to Francis’ urging the world to stop destroying the planet, while back in China the noxious fumes keep rising into the air from the smelting plants of their turbo-charged economy.

What Wenders misses is the centrality of the Eucharist to a Catholic life. We see Francis crossing himself and blessing others, referring to Christ regularly, speaking of the Gospel. But never once is he seen celebrating Mass. This glaring omission is hard to fathom. Did Wenders and the Vatican, who co-operated in the making of this film, deliberately seek to keep it Catholic-lite, to appeal to a wider audience?

It is also, at times, controversy-lite. On gay people, there is just the famous “Who am I to judge?” comment. On women, some platitudinous and irritating remarks about how wonderfully complementary they are – but so complementary they are barely visible in the Vatican. On abuse, there is Francis saying there must be zero tolerance. At this point, one yearns for some decent journalistic interrogation, challenging him on how much promise there was on this issue and how little progress has been made. After all, this documentary is called Francis – A Man of His Word. Is he?

And yet for all that, this is a film well worth watching. Film-makers haven’t done well by popes. There was Rex Harrison prancing about in white as Julius II in The Agony and the Ecstasy, and Jude Law as a preposterous, fictional Pius XIII in The Young Pope. The odd documentary was made about John Paul II taking on Communism. But this is in a different league – just as this pope is in a very different one, too. Perhaps his greatest achievement over the past five years, inside the bubble of the Vatican, is to have remained a loving and loveable human being. And that is what Wenders conveys so well.

Catherine Pepinster is a former Editor of The Tablet and author of The Keys and the Kingdom: The British and the Papacy from John Paul II to Francis.