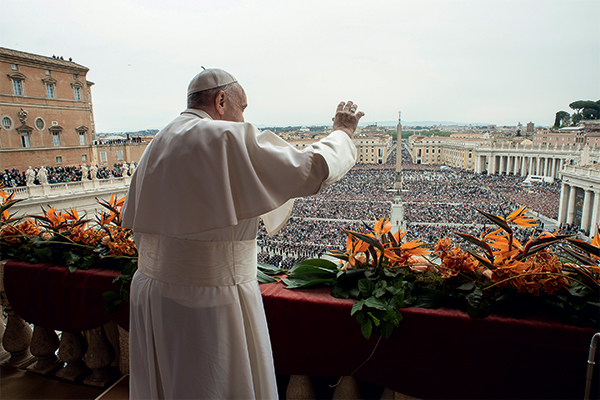 The Covid pandemic will have long-lasting repercussions for the Church. Our Rome correspondent suggests that the Catholicism that will emerge from the crisis under the leadership of Pope Francis will be leaner and clearer in its mission

A virulent pandemic might have forced church buildings around the world to close, but the Church itself never closes. As Jesus says in Matthew 24:35: “Heaven and earth will pass away, but my words will not pass away.”

Pentecost, the birthday of the Church, is an appropriate moment to reflect on what sort of mission and witness will emerge from the crisis, and how Pope Francis will push forward his vision for missionary evangelisation as the Covid storm begins to subside.

“What we are living now is a place of metanoia, and we have the chance to begin. So let’s not let it slip from us; let’s move ahead,” Francis said in his interview with The Tablet last month. In two prophetic documents, his manifesto for this papacy, Evangelii Gaudium, published in 2013, followed two years later by his encyclical Laudato Si’, a powerful call to protect the natural world, the Pope offers a roadmap through the crisis and into the future.
Coronavirus has put “normal” Church life on hold, with many still deprived of access to the sacraments. It has been a trial of faith that some countries have not seen in centuries. After weeks of lockdown, Catholics are now gradually returning to church, attending Mass and receiving the sacraments, but only in a highly restricted way. This is unlikely to change anytime soon, and the Church must adapt to the new situation. Things will not easily go back to how they were before.
“This is a time to reset,” Augusto Zampini-Davies, the Argentinian priest who the Pope has asked to play a leading role in the Vatican’s Covid-19 commission, tells me, adding: “What is essential? This is the question. What is essential for the Church to resume, to regenerate and to allow the Holy Spirit to ignite the essential dimension of Christianity? If Christ is walking with us in this tragic moment, where does he want to lead us?”

Dioceses and parishes have seen their income in free fall, which is leading to jobs being lost and to some institutions facing closure. As Stephen Bullivant wrote earlier this month in The Tablet, the long-term decline in Mass attendance in Europe and the United States is likely to be accelerated by the pandemic. But there are also reasons to be hopeful. The coronavirus has revealed a hunger for faith and shown that the Church meets an essential need. A recent ComRes poll pointed to this, when it found that a quarter of adults in the UK had watched or listened to a religious service during the lockdown. But the measure of the Church’s health can never just be based on Mass attendance figures, or on a large institutional presence. “We are not called to be successful, but to be faithful,” as Mother Teresa of Calcutta used to say.

Another prophetic twentieth-century leader, the late Cardinal Carlo Maria Martini, put it this way: “Jesus asks: will the Son of Man, when he returns, find faith? He doesn’t ask: will I find a great and well-organised Church?” For Francis, the crisis isn’t an opportunity to restructure institutions; it’s a moment to reflect, and to ask what can be done to make sure every aspect of ecclesial life is focussed on missionary evangelisation, so that it is drawn closer to the Church of the early centuries. Defeatism, Francis declares in Evangelii Gaudium, “turns us into querulous and disillusioned pessimists, ‘sour- pusses’”. The Pope wants a Church that is outward-facing, in a permanent state of mission and focussed on the poor, rather than inward-looking and self-referential.

“Do not waste time and resources in looking at yourself in a mirror, devising plans centred on internal mechanisms, functionality and the efficiency of your own bureaucracy. Look outside,” the Pope said in a message sent to the Pontifical Mission Societies last week. “Break every mirror in the house!”

So how is the Church going to emerge from the pandemic, and what will things look like? I suggest that there will be four “marks” of the Church in the post- Covid-19 world. The first is missionary simplicity. Coronavirus is forcing the Church to concentrate on its core message. Throughout his pontificate, the Pope’s message to the Church has been simple: focus on taking the Good News of Jesus Christ to the “peripheries”, to the places where the most vulnerable, the poorest and the forgotten are to be found.

A Church of missionary disciples will be marked by its simplicity. It will not “erect obstacles” to people searching for faith. “Why complicate something so simple?” the Pope asks in Evangelii Gaudium when talking about the cry of the poor and the need for God’s mercy. “Jesus taught us this way of looking at others by his words and his actions. So why cloud something so clear?” This Church of missionary simplicity will also be characterised by joy amid difficulties, and by an openness to the Holy Spirit, the agent of true reform. “Joy adapts and changes, but it always endures,” the Pope stresses.

The second “mark” of the emerging Church will be that, though it might be smaller, it will be more focussed on the poor. It is inevitable that the global economic crisis caused by the lockdown will see a winnowing of certain church bodies and institutions, and a closure of some parishes and activities due to a fall in income and numbers. But throughout the history of the Church there has been a pruning away followed by new growth. Now is the time to discern which structures “hamper efforts at evangelisation”, as Francis has put it, and which serve them.

If the Church might be smaller, it will be characterised by service: from helping the destitute, to educating those most in need and being at the side of those struggling with their mental health. The unemployment and financial hardship that will come because of Covid, and will hurt the poorest the most, will make the social mission of the Church more vital than ever. A nimbler institution, clearer in its priorities, better able to respond to where the needs are greatest, can act as a leaven in society. Jesus, the Pope told Morocco’s small community of Catholics last year, “put us in the midst of society like a handful of yeast: the yeast of the Beatitudes and the fraternal love by which, as Christians, we can all join in making present his kingdom.”

The third mark that will characterise the Church in the post-Covid world will be a renewed relationship with the natural world and with science. By closing church buildings and suspending its liturgies, Church leaders were responding to scientific advice. Faith is not opposed to reason or science; the relationship between faith and science is one of mutual enrichment. Francis has already shown this with Laudato Si’, which brings the spirituality of Francis of Assisi together with the best science on the protection of the environment.

And it works both ways. Brune Poirson, France’s ecological minister and not a believer, has praised Laudato Si’ – which this month marked its fifth anniversary – telling the French publication La Vie last week that there can be no “ecology transition” without an understanding of the transcendent.

“From the outset, Francis’ pastoral response to the pandemic took into account the recommendations of scientists and medical experts,” Richard Gaillardetz, the chair of the theology department at Boston College, pointed out to me. “One of the most remarkable features of Pope Francis’ encyclical, Laudato Si’, was the attention it paid to the insights of modern science.” Gaillardetz poses the striking question: “Could Catholicism come out of the pandemic, under Francis’ leadership, uniquely situated to demonstrate to the modern world that belief in modern science need not be sacrificed at the altar of religious belief?”

The fourth feature, and perhaps the most delicate, will be liturgical and pastoral creativity. The Church is already finding new ways to bring the sacraments and the Gospel message to the faithful in the context of public health restrictions. “The most difficult challenge is the liturgy: everything seems to be focussed on the Mass, and not on other possible liturgical experiences,” Massimo Faggioli, a Church historian and theology professor at Villanova University, explained. “It shows the limits of the reception of Vatican II’s teaching on Scripture.”

Virtual services are likely to continue to be popular, and, as restrictions lift, people may go to Mass less frequently. The post-Covid world is going to require Catholics to take more responsibility for their faith, requiring a move to active discipleship rather than being merely passive “religious consumers”. Creativity is going to be more important, with a burgeoning of outdoor Masses, home liturgies, spiritual guidance by Zoom and other innovations. As Fr Zampini-Davies points out, “We are not the owners of God’s grace”.

There is a danger, Faggioli argues, that the pandemic will not only accelerate secularising trends but also force a slowdown of one of the major ways Pope Francis hopes to bring the Church envisaged by the Second Vatican Council to life: synodality. Large Church gatherings such as synods are not going to be possible in the short term; the Australian Church has already suspended the plenary council it had been preparing to hold this October for 12 months. “Rome and the local churches must find a way to keep [synodality] going,” Faggioli says.

The world is looking to Christianity for leadership, to help us make spiritual sense of the Covid tragedy. Gaillardetz suggests that Pope Francis might come out of the pandemic with his reputation as a pastoral leader enhanced, in contrast to “some prelates who acted as if Christian baptism offered its own inoculation against disease”.

Covid-19 has hit Christians, and the followers of all religions, hard. The lockdown coincided with Easter, cutting people off from the treasured lifeblood of the sacraments at the high point of the liturgical year. Yet there are signs, too, of new life – and of the possibility of a Church emerging from the crisis more focussed on its core mission and trusting in the promise left by Jesus to “do greater works than these” (John 14:12).