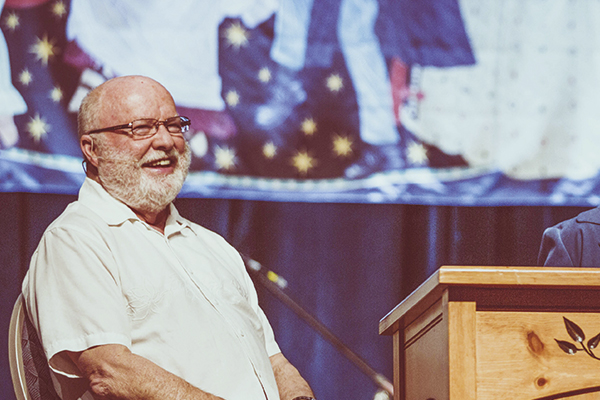 The Franciscan friar and spiritual writer Richard Rohr discusses his new book, his recent illnesses and the prospects for reform in the Catholic Church

Jon Sweeney: For those who have been reading you devotedly for many years, how does your new book fit in your body of work?
Richard Rohr: The Universal Christ is essentially my scriptural and spiritual attempt to reground the Christian message where it first started and flourished, if we are to believe the hymns in Colossians 1, Ephesians 1, the Prologue to John’s Gospel, 1 John 1, 1 Peter 1, and Hebrews 1. Yes, there are lots of ones there, which already says a lot about how our Gospel was first read and how foundational this revelation was meant to be.

However, unfortunately, an understanding of Christ as universal was appreciated and developed more in the Eastern Churches and among the Eastern “Fathers” than it was in the West, which was always more individualistic. After the one holy, undivided Church “divided” in 1054, the Western Church largely lost this corporate, social, and historical understanding of the Gospel, and, with it, our very notion of the Christ.

For all practical purposes, we in the West reduced our understanding to just Jesus’ last name. And that is not just me being clever, but reveals the loss of a pivotal part of the Gospel which grounds Jesus’ message in Creation and makes us a more “natural” religion than one that entirely depends on a revelation a mere 2,000 years ago. That is a mere second in geological time! Which leaves about 13.7 billion years empty of the Divine Presence. That just cannot be true.

J.S. There seems to be something very Franciscan about this topic. Did you feel that, in the writing? Were you in some ways returning to your mystical Franciscan roots?

R.R. Without any doubt, it was primarily the Franciscan tradition that rediscovered a Creation-based understanding of the Gospel and still remained within mainline Christianity. However, it was only in our early period that we tried to create the philosophical and theological foundation for St Francis’ radical incarnationalism, especially in the writings of St Bonaventure and Blessed John Duns Scotus. They gave intellectual heft to what Francis spiritually intuited when he spoke of animals, elements, and all other humans as “brothers” and “sisters” to each of us.

Yet, after that exciting first century, we Franciscans largely became good pious priests and brothers, and shared in the individualistic reading of the Gospel, along with most of the Western Church. It was hard to hold on to our “alternative orthodoxy”, especially after the absolute conformity that was required of all theologians and spiritual writers after the Reformation.

Duns Scotus taught us “the univocity of all being”, that we could speak of all creatures with “one consistent voice”, as opposed to the Thomistic view of the mere “analogy of being” (although I would have been happy if Catholics had at least believed that!)

J.S. What’s next for you, Richard? I know you’ve had some health problems. Are you planning future projects?

R.R. Since my heart attack 15 months ago, and the return of my prostate cancer, I know my time is limited. But any of us must say the same.

Seventy-six years is more than I ever expected. The monograph I would like to complete, if I can, is on my hero, St Paul. I am convinced that he understood all our major Christian notions (incarnation, the human person, redemption, sin, suffering, and punishment) in a primarily collective and social sense. Once you begin to imagine that way, it becomes rather evident in his letters, I think. He was offering history a radical revisioning of both religion and society, but we missed it all by making him into an isolated individualist like ourselves. We made a superlative mystic into a mere moralist and zealot.

J.S. You are one of the most popular Catholic priests in the United States. What do you make of what’s happening in the Church today? What do you make of this near-schism we seem to be undergoing? Is there hope for a unified Catholic Church in the second half of the twenty-first century?

R.R. You are asking way too much of me! I cannot see with that big a lens. Let me just offer this. When I see that following a worldwide, ecumenical Council of the Church in the 1960s, its inspired teaching could in so many ways be undone and ignored (directly or indirectly) by two subsequent popes, a whole generation of bishops, numerous seminary faculties, and legions of young priests who are not known for being either pastoral or humble, I must say that I have serious doubts about the Church’s ability to reform itself. It aligned with the Roman Empire after 313 CE, and it consistently still prefers power and authority over love and service. These seem always to win out. The paedophilia scandal again reveals this ever-recurring “cancer of clericalism”.

The Catholic tradition contains huge gems and jewels of wisdom, and will always be with us, but when it seeks righteousness instead of holiness, it is more a part of the problem than any good solution. In the next century, God is going to show us a very different shape for church.

The Universal Christ: How a Forgotten Reality Can Change Everything We See, Hope For and Believe by Richard Rohr is published this month by SPCK at £9.99 (Tablet price, £9). Jon M.Sweeney is the editor of Francis of Assisi in His Own Words: The Essential Writings, published by Paraclete Press at £13.99 (Tablet price, £12.59).