“Consider God’s humility,
give him your whole heart!
Like him, become humble yourself,
so that you can be raised up by him!
Hold nothing back for yourself
so that he, who gave himself completely for you,
can take you completely as his own.”
–St. Francis of Assisi


Francis (Francesco) Bernardone was born at Assisi in Umbria in 1182.  His father, Piero, was a prosperous merchant, and Francis planned to follow him in his trade, although he also had dreams of being a troubadour or a knight.  In 1201 he took part in an attack on Perugia, was taken hostage, and remained a captive there for a year.  As a result of his captivity and a severe illness his mind began to turn to religion, but around 1205 he enlisted in another military expedition, to Apulia. However, he had a dream in which God called him to his service, and he returned to Assisi and began to care for the sick.

In 1206, he had a vision in which Christ called him to repair His Church. Francis interpreted this as a command to repair the church of San Damiano, near Assisi.  He resolved to become a hermit, and devoted himself to repairing the church.  His father, angry and embarrassed by Francis’ behavior, imprisoned him and brought him before the bishop as disobedient.  Two years later he felt himself called to preach, and was soon joined by companions. When they numbered eleven he gave them a short Rule and received approval from Pope Innocent III for the brotherhood, which Francis called the Friars Minor.

In his life and preaching, Francis emphasized simplicity and poverty, relying on God’s providence rather than worldly goods.  The brothers worked or begged for what they needed to live, and any surplus was given to the poor.  In 1212 Clara Sciffi, a girl from a noble family of Assisi, left her family to join Francis.  With his encouragement she founded a sisterhood at San Damiano, the Poor Ladies, later the Poor Clares.

In 1219 Francis joined the crusaders and preached to the Sultan of Egypt.  Francis did not wish to found an ‘order’, but in time the brotherhood became more organized.  Thousands were drawn to his sincerity, piety, and joy.  Eventually Francis wrote a more detailed Rule, which was further revised by the new leaders of the Franciscans.  He gave up leadership of the Order and went to the mountains to live in secluded prayer.  There he received the Stigmata, the wounds of Christ.  He died at the Porziuncula on October 3, 1226.

Francis is perhaps the most beloved Saint of our tradition.  He is honoured by Catholics, Protestants, and non-Christians.  Too often his message is lost and we reduce his role to that of a gentle, whimsical hippie who fed birds, smelled flowers and tamed wild wolves. He was and is the model of a radical Christian for all of us.  Through his simplicity and humility, he preached the love of God.  And yet as faithful as he was to this love, and to the constant need for conversion, he gives us the stark reminder that we remain unfaithful, unloving, unforgiving.

For Francis, the standard was always Christ and Christ alone.  He is the Little Poor One, il Poverello, the Troubadour of the Great King, and even moreso, he is what Thomas of Celano, Francis’ first biographer wrote of him – Ditissimus Pauper – the “Richest of Poor Men” –- because he clung to that one rag of luxury – the manners of a court (royal life).  In a Court, there are 100 courtiers and one King.  In Francis’ story, there are 100 Kings and one courtier.  He treated the whole mob of people as a mob of Kings.  Francesco was the courtier. Over eight hundred years ago, Francis heard the plea of the Lord from the Cross in San Damiano – “Francis, go and repair my Church”.  Revered as a holy person in tune with God and his creation, Francis of Assisi is a man for all people and all times, especially our own, so much in need of light and love, beauty and peace.

My favorite biography of St. Francis of Assisi is that of the great British writer, G.K. Chesterton. I have read that work many times throughout my life, and one passage has taken on new meaning for me over the past months.  Listen to Chesterton’s words:

“St. Francis must be imagined as moving swiftly through the world with a sort of impetuous politeness; almost like the movement of a man who stumbles on one knee half in haste and half in obeisance.  The eager face under the brown hood was that of a man always going somewhere, as if he followed as well as watched the flight of the birds.  And this sense of motion is indeed the meaning of the whole revolution that he made; for the work that has now to be described was of the nature of an earthquake or a volcano, an explosion that drove outwards with dynamic energy the forces stored up by ten centuries in the monastic fortress or arsenal and scattered all its riches recklessly to the ends of the earth.

In a better sense than the antithesis commonly conveys, it is
true to say that what St. Benedict had stored St. Francis scattered; but
in the world of spiritual things what had been stored into the barns
like grain was scattered over the world as seed.  The servants of God
who had been a besieged garrison became a marching army; the ways of the
world were filled as with thunder with the trampling of their feet and
far ahead of that ever swelling host went a man singing; as simply he
had sung that morning in the winter woods, where he walked alone.”

“What Benedict had stored, Francis scattered…”  How fitting are these words for Pope Francis, who visits Assisi this week to walk in the footsteps of his namesake. Many of us in both religious and secular media have been a bit too quick to interpret Francis’ gestures as a sign of discontinuity with the work of his predecessor. What we forget is that more than any of the choices made by Francis, it was Benedict XVI’s resignation that represented the greatest change of the papal office.  Benedict’s decision does not in any way undermine the papacy.

Benedict XVI, the great teacher taught us that the Petrine ministry is not about externals, power, prestige and privilege.  Pope Benedict brilliantly emphasized the need for intense theological life, constant prayer and quiet contemplation which would naturally give way to good moral living, a commitment to others, and a life of charity and justice. With Francis of Buenos Aires, it seems that the perspective is the other way around – it is concrete, charitable actions and visible human affection that redefine the theological life, giving it depth and breath.  And such actions attract others to Christ and the Church and serve as privileged instruments of evangelization.

What Benedict stored, Francis scatters…  Francis’ striking symbolism is becoming substance. Francesco seeks a simpler church, more closely identified with the poor.  He is undoubtedly aware of the scandals, the corruption, the hypocrisy, the challenges, the leaks and the lobbies, and the things that need to be fixed inside the Vatican.  But many around the world, inside and outside the Church, from the left, right and centre of the Church are witnessing something new happening.  Smallness of mind and meanness of spirit are slowly transformed into wideness of thought and generosity of spirit.  We have heard that many people are returning to the Sacrament of Reconciliation because of what is happening in Rome.  Could this not be a gift of the Spirit and a sign that the New Evangelization has begun in some unexpected places?

What Benedict stored, Francis scatters…  “In the world of spiritual things what had been stored into the barns like grain was scattered over the world as seed… .”  Let us never forget the deep continuity between Pope Emeritus Benedict XVI and Pope Francis, Bishop of Rome. It is manifested in their outlook on faith and their awareness that it is the Lord who leads the Church, not the Pope.

Francis teaches the doctrine identical to that of his predecessors.  He reminds us of the words of his predecessor Blessed John, soon to be saint, over 50 years ago at the beginning of the Second Vatican Council: “The substance of the ancient doctrine of the Deposit of Faith is one thing, and the way it is presented is another.”  With Francis, it’s the same Petrine brand but the packaging has changed!

On October 4, the Feast of Saint Francis, whose name Cardinal Bergoglio took after his election on March 13, 2013, the Pope will travel to Assisi.  This pastoral visit will occur right after the first meeting in Rome of the eight cardinals who form the Pope’s newly constituted Advisory Group to reform the Curia. he decided to summon to reform the Curia—those eight prelates will accompany him to Assisi.

According to the Bishop of Assisi, Bp. Domenico Sorrentino, Pope Francis explained his intentions to him in a letter:  “I want to speak about the way in which the Church must divest herself, how in a certain way the Church must repeat the gesture of Francis and the values that this gesture implies,” he wrote, referring to the episode from the life of the Poverello [Little Poor Man] who stripped himself of his goods and his clothing so as to place himself under the authority of the bishop.

These words echo the ones that the pope spoke on March 16, during his first audience given to the thousands of media workers and journalists from around the world in which he said that he wished for “a Church that is poor and for the poor”. 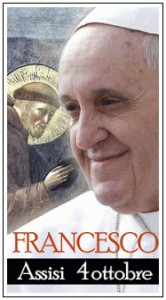 7.45 The Pope arrives in Assisi by helicopter.

8.00 The Pope visits the Serafico Institute, a religious charitable institution that cares for sick and disabled children . He will meet the children in the institute’s church and deliver a short address.

8.45 The Pope makes a private visit to the Shrine of San Damian where St. Francis had his conversion after hearing the voice of Jesus.

9.20 The Pope arrives at the Archbishop of Assisi’s residence where he will visit the famous room where St. Francis stripped off his clothes and gave them back to his father and from then on lived a life of poverty dedicated to Christ. In this room, the Pope will meet poor people who are assisted by Caritas and deliver a speech.

10.00 The Pope arrives at the church of St. Mary Major for a private visit.

12.20 The Pope arrives by car at the Upper Basilica of Saint Francis and proceeds to the Crypt where he venerates the tomb of the saint.

13.00 The Pope visits the Caritas Reception Centre at St. Mary of the Angels where he will lunch alongside the poor people who are being assisted at the Centre.

14.30 The Pope visits the Hermitage of the Prisons where he will pray in St. Francis’ cell.

15.15 The Pope visits the San Rufino Cathedral for a meeting with clergy, consecrated persons and members of the diocesan pastoral council and will deliver a speech.

16.15 The Pope visits the Basilica of Saint Clare where he will venerate the tomb of the saint, pray before the Crucifix of Saint Damian and greet the cloistered nuns.

17.30 The Pope pays a private visit to the Basilica of St Mary of the Angels and prays there.

17.45 The Pope meets young people in the square outside the Basilica and delivers a speech.

18.45 The Pope arrives at the Shrine of RivoTorto and visits St Francis’ hovel.

19.15 The Pope takes his leave after greeting the authorities and flies back to the Vatican.