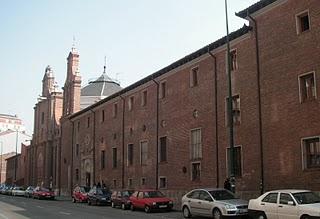 The college that provides the foundation year for young men from England and Wales training for the priesthood has unveiled a new website that reflects its history and contribution to the Church.

The Royal English College of St Alban’s in Valladolid, Spain, dates back to 1589, when Catholicism was banned in England and Wales and it began training priests to help keep the faith alive.

In 1998 the Bishops’ Conference of England and Wales endorsed St Alban’s as its Propaedeutic Seminary, helping establish a one-year programme of formation for men before they move on to major seminary.

The new website tells visitors how Jesuit priest Father Robert Persons founded the Royal English College in Valladolid with the support of Spain’s Catholic King, Philip II, during the reign of Queen Elizabeth I.

Twenty-seven men who trained in Valladolid were captured and tried back in England and Wales for the “crime” of Catholic priesthood and were subsequently martyred. Six of them have since been canonised by the Catholic Church.

The college’s rector, Canon Paul Farrer, said: “The website is the first port of call for almost everyone who wants to get in touch with the college, so we need to show we are a house which is aware of its heritage but also its vital role for the Church in England and Wales and beyond. I’m delighted to say that the new site does that very, very well.

“The Propaedeutic Year is so important to the life of the Church. With seminary formation under so much scrutiny, it is crucial that we play our part in ensuring the authenticity and openness of candidates for the priesthood.

“In that sense, the website is a small thing, but as the digital face of the college it does show that we are serious about formation and dedicated to the mind of the Church in the formation process. At the same time, it shows what a wonderful house the college is, and tells the story of its students admirably.