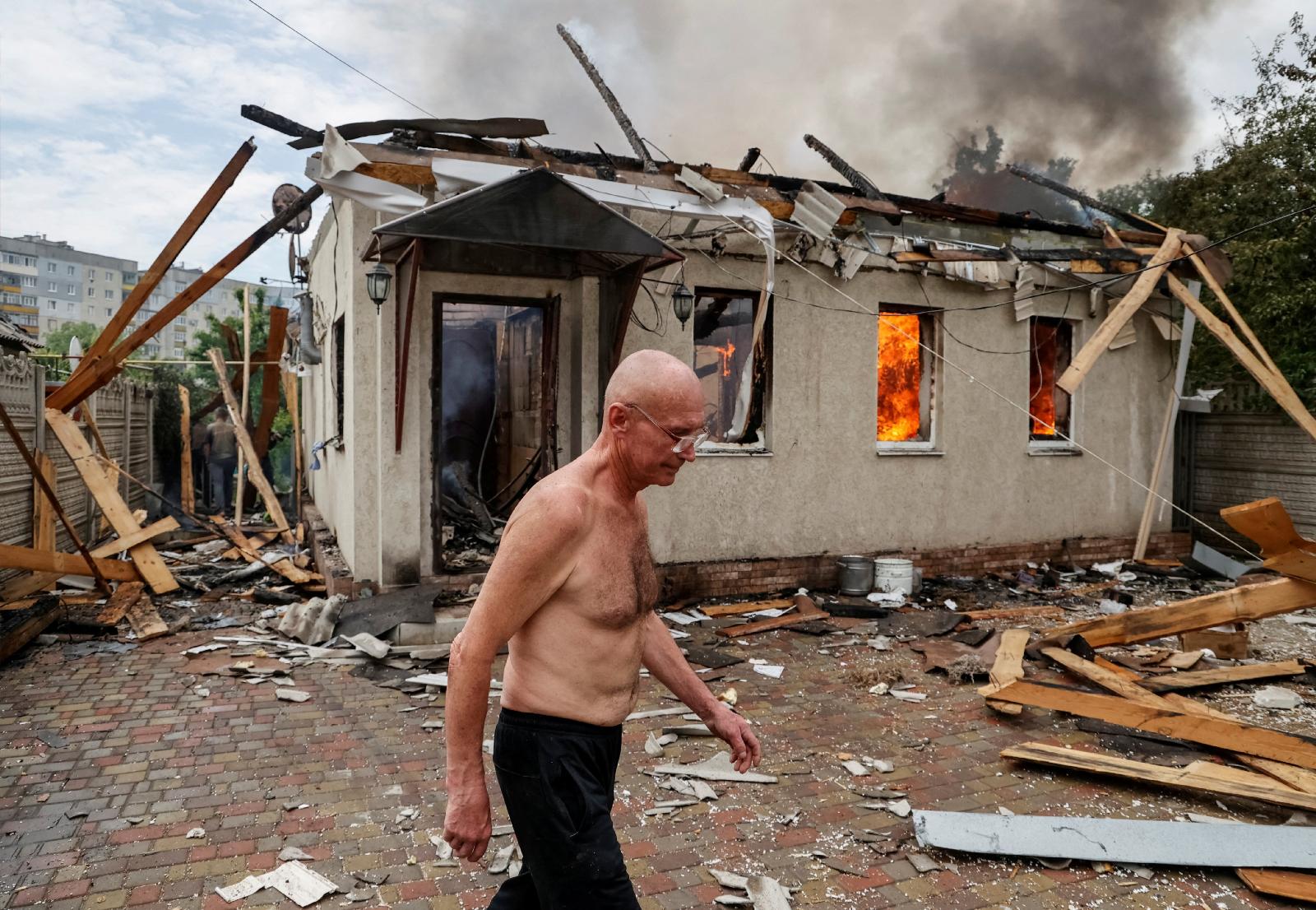 A man walks past his neighbour’s burning home after shelling by Russian troops in Lysychansk, Ukraine.-CNS photo/Serhii Nuzhnenko, Reuters

Ukraine’s Greek Catholic archbishop has accused Russian forces of violating all norms of war, stating that they have destroyed one of the country’s most historic religious sites. “This attack shows nothing is sacred for the Russian occupiers - the whole of Ukrainian territory is a target for Russian rockets, and no town or village can feel safe”, said Major Archbishop Sviatoslav Shevchuk of Kyiv-Halich, whose church combines the eastern rite with loyalty to Rome.

The Church leader was reacting to the weekend shelling of the Holy Dormition monastery at Svyatogorsk Lavra, near Donetsk, which killed several Orthodox monks and refugees receiving shelter.

Meanwhile, the head of Ukraine's independent Orthodox Church, the PCU, told a delegation from Germany's Bishops Conference he remained confident his country was “moving towards victory”, but warned that current “acts of genocide” and “undisguised evil” must be prevented from spreading to the European Union. Heavy fighting is currently under way as Russian forces seek control of the eastern Donbas region.

“We must testify to the truth about the horrors of the Russian attack – Ukraine's people have an unquestionable right to defend their homeland with weapons in their hands,” Metropolitan Epiphany Dumenko told the German bishops in Kyiv last Friday. “As Christians, however, we should not let hatred dominate us.”

In a weekend message, President Volodymyr Zelenskyy called for Russia’s suspension from Unesco for “deliberately and systematically destroying Ukraine's cultural and historical heritage”.

Meanwhile, leaders of Metropolitan Epiphany’s PCU reported that dozens more parishes had switched allegiance to it from the larger Moscow-affiliated Orthodox Church, or UOC, and disputed claims that the UOC's governing council had broken with Russia's Moscow Patriarchate by declaring “full independence and autonomy” in a late May resolution.

The Pope said he was gravely concerned about the blocking of grain exports from Ukraine, and appealed against using wheat “as a weapon of war”, adding in his Angelus message on Sunday that the “aggression against Ukraine” had negated “God's dream for humanity”.

“The nightmare of war has once again befallen humanity: peoples in conflict with one another, killing each other, being driven from their homes instead of brought closer”, the pontiff told Rome pilgrims. “I renew my appeal to the leaders of nations: do not lead humanity into ruin!... Let true negotiations take place, real talks for a ceasefire and a sustainable solution. Let the desperate cry of the suffering people, seen every day in the media, be heard. Have respect for human life and stop the macabre destruction of cities and villages in the east of Ukraine.”

In a communique after the German bishops' four-day visit, Bishop Bertram Meier of Augsburg said he believed Ukrainians deserved support “from all freedom-loving people” in their struggle against Russia's invasion, adding that evidence suggested the country's cultural institutions were being deliberately targeted “to destroy Ukraine's independent identity and erase its history”.

Meanwhile, Kyiv said it would continue pressing for Patriarch Kirill of Russia to be sanctioned by the European Union, after his name was not included in the EU's sixth package of measures last Thursday, at the request of Hungary.

The Patriarch told military cadets in Moscow last week that Russia was a “peace-loving power... inoculated against all military adventures, any ability to be aggressive”, and only needed armed forces to protect its “sacred borders”.