Sarah Crossan: prayers in her bones 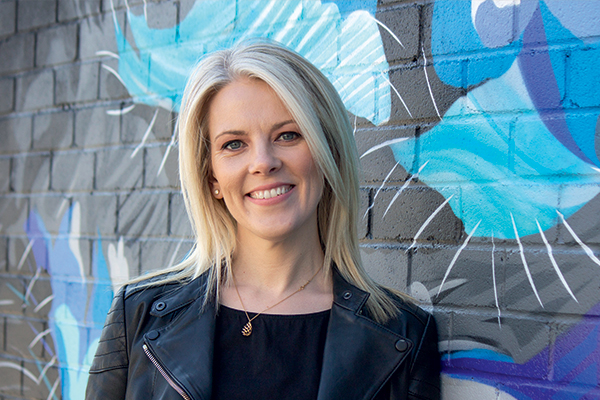 The award-winning children’s author talks about the poetics of her first novel for adults, and why she remains steeped in the Catholicism of her Irish upbringing

“Hail, Holy Queen, Mother of Mercy,” begins Sarah Crossan, “Hail, our life, our sweetness and our hope.” Almost without realising, I find myself joining in with her: “To thee do we cry, poor banished children of Eve …” It is the only time in three decades that I can remember jointly reciting a prayer out loud in a newspaper interview, but it feels as natural as when both of us used to say such prayers as part of the daily routine of our Catholic schools.

It all has all come about because we started by talking about poetry. Crossan writes many of her award-winning novels in blank verse. So far her audience has been what publishers call YAs (Young Adults) – teenagers to the rest of us. Her first, 2012’s The Weight of Water, was shortlisted for the prestigious Carnegie Medal for children’s writers, as was 2014’s Apple and Rain. In 2016, One went one better and won.

And the honours have kept coming. In 2018, the 39-year-old was named as Ireland’s Laureate na nÓg, or children’s laureate, her two-year tenure ending during lockdown. “It was a shock when I was asked, completely,” she recalls. “I didn’t think I had enough books out.”

Crossan’s new novel, Here is the Beehive, is her first for grown-ups, and once again is in verse. Where, I had started out by asking her, does the poetry come from?

“I’ve always felt really connected to poetry. People always ask me why I write in poetry and I used to have this spiel about doing Romeo and Juliet when I was in Year Nine and loving the language of it, but I kept thinking, it can’t be that. Because I do feel that there is something quite organic going on when I write. It doesn’t feel forced. It doesn’t feel like something learned.”

Enlightenment came when attending her niece’s First Holy Communion. “I was standing up, sitting down, partaking in the Mass, when it suddenly dawned on me that this was in my bones. This wasn’t just something that I had been surrounded by. It was how I learnt to speak. I knew prayers before I understood the words in the prayers.”

From the poetry and alliteration and rhythms of those prayers comes her poetry. “I think the prayer that for me highlights it is ‘Hail Holy Queen’.” And then we are away.

There is a slight air of embarrassment in the ether when we finish our recitation, but, though warm and engaging, Crossan doesn’t let it distract her from what she is explaining. “The poetry that is part of that prayer,” she says, “is what makes it intoxicating. As a child I was intoxicated. I saw the Virgin Mary as – like a superstar. I didn’t revere celebrities or anything like that when I was growing up, in the way that my daughter does now. It was the Virgin Mary, because of the power of that prayer.”

Though she was born in Britain, it was only because her parents were over on holiday at the time from the family home in Dublin. Her first seven years were spent in Ireland. Even when her father’s work brought the family over to north London, summers were always spent with grandparents in Donegal or Meath.

“The Rosary was part of those summers,” she reminisces. “My grandad would do it every evening. The way that we children were called in was that they had a burglar alarm. So when it went, you knew it was either tea or the Rosary. And it was usually the Rosary but then the cake followed. You never forget those prayers. You learn it bodily. It is in some other part of you that’s not the intellectual part. It’s the body. The body remembers.”

Before she became a full-time writer, Crossan trained as a teacher of English and drama – “I come from a family of teachers” – and taught for a decade in England, Ireland and, for a spell, in Hoboken, New Jersey. It meant she spent a lot of time on planes. “When I was going through a difficult time a few years ago, I remember being on a plane and listening to the Rosary. It was the only thing that would curb my anxiety, apart from medication the only thing that was going to centre me and remind me that I was breathing in this space, right now. I didn’t want it to end.”

Her Catholicism goes deep, yet it is also something she says she struggles with. Her schooling – where she first learnt the “Hail Holy Queen” – was at Our Lady’s Convent High School in north London. “I had very liberal parents and went to a very liberal school. I had very liberal RS teachers. So I don’t feel as if I experienced any of the dogma that some people I know associate with Catholicism.”

There are nonetheless things about the Church of her upbringing that she cannot overlook, or put to one side. “I always describe myself, when asked, as an Irish Catholic, and as an Irish Catholic I think the Irish Church has behaved appallingly. I can’t ignore what happened within those orphanages, the sweeping it under the carpet, rather than offering a very clear apology at the time.”

Much has been said and written about the impact of the abuse scandal on the faith and Mass attendance of ordinary Catholics, not only in Ireland but across other once staunchly Catholic Mass-attending communities. Crossan, it is hard not to conclude listening to her, is publicly giving voice to something widespread that nonetheless too often goes unheard – the tension many face between being so steeped in Catholicism that it is there in every aspect of life, work and (in Crossan’s case) the body, but at the same time feeling alienated from the Church by some of the actions of its leaders.

There are, she accepts, no easy answers. At home in Hertfordshire, she hasn’t raised her daughter in Catholicism. “Her two cousins have been, and that makes her wonder about why she is different, or why she is not part of that. Sometimes I feel sad for her that she doesn’t get that because it was a very positive experience for me.”

And everyone, she acknowledges, has their own perspective. “I find it problematic that all the highest roles [in the Church] go to men, but then my auntie is a nun, and she’s very happy with that, and she enjoys her life. She has a great life. She is a really powerful woman. She was a headteacher at a school. So I see the reasons why people are still part of that community. If someone was to say something bad about Catholics, I would be the first to defend then. I don’t know any people who practise Catholicism who are bad people, but the system is cracked.”

When talking with other Catholics – as today – she admits that “I will always be the critic”. It is especially true within her own family of three brothers and a sister. “I have one brother who is quite involved in the Church, as is my sister-in-law,” Crossan says, “and we do have raging arguments because I feel some part of them fails to question.” She shrugs. “But then we have the same sort of arguments about Brexit. That is just the way we conduct ourselves.”

Here is the Beehive is set in the Irish Catholic north London where they were all raised. Its title is taken from a nursery rhyme – “Here is the beehive. But where are all the bees? Hiding away where nobody sees.” If the style in which it is written will be familiar to her fans – the pared-down immediacy that comes with telling a story in verse makes it, for this reader at least, both compelling and a thing of beauty – its subject matter, infidelity and obsession, marks a big departure. So much so that recently on social media she had to offer a health warning. “Dear Teenage Reader, Thank you for being excited about Here is the Beehive publishing but … it is definitely not a YA novel.”

But Crossan has not shied away from serious subjects in her previous YA books. Toffee (2019) tackles dementia, and Moonrise (2017) the death penalty. And in her two years as Irish laureate, she took on the daunting challenge of enthusing teenagers about poetry.

“The problem with teenagers is that people think they are adults. They look like adults, so when a teenager who is a child says, ‘I don’t like poetry’, people just go, ‘OK, that’s just not what they are into anymore’. But what it really means is they have had one bad experience with poetry, and then got no more encouragement. I just wanted to reel them back in, to say, ‘You are still invited in to this thing – come and join us.’” It is a mission she plans to continue, even now that her period as the laureate has ended.

On the subject of dipping her toe in the world of grown-up fiction, she is admirably sanguine. “I always assume my books will fail. And that is the best way to be because then I am really proactive about making them as good as they can be. I don’t believe in the talent myth. I just think it is hard work and questioning yourself and never feeling satisfied.”

That sounds, I suggest, like something a teacher might say. She considers. “Maybe it is Catholic: never being good enough so constantly striving to be better.”

Saint George, martyr
Jn 6:52-59 Whoever eats my Flesh and drinks my Blood remains in me and I in him.