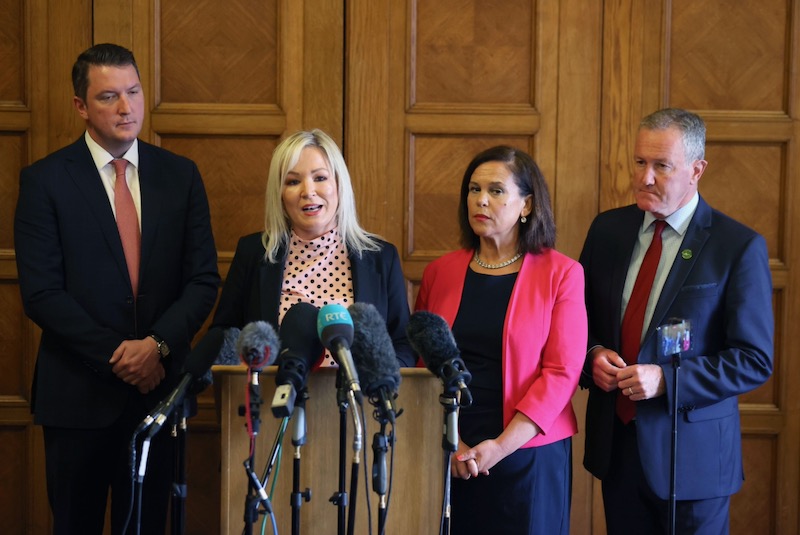 Sinn Fein has become the largest party in Northern Ireland after winning 27 seats at the election. The Democratic Unionist Party secured second place on 25 seats, a loss of three seats from 2017.

The result is being described as a seismic political moment for Northern Ireland as a unionist party has always been the largest party in the assembly since the formation of Northern Ireland in 1921. That dominance ended with this election.

If an agreement can be reached to re-form a power-sharing executive in Stormont, Sinn Fein will be able to nominate leader, Michelle O’Neill, as first minister, the first time the party will have held this role.

However, DUP leader, Jeffrey Donaldson, has said his party will not nominate ministers to the power-sharing Executive unless “decisive action” is taken on the Northern Ireland Protocol.

Under the terms of the Good Friday Agreement’s power-sharing rules, both the largest nationalist and unionist parties must be part of the executive for it to function.

The Taoiseach Micheál Martin has said there is now less tolerance for an “abstentionist” approach to politics in Northern Ireland.

While Sinn Féin’s historic win at the polls is the defining story of this divisive election, there was also big wins for the centre ground Alliance Party which secured 17 seats, making it the third largest party.

The shift towards Alliance is symbolised by the success of candidate Patricia O’Lynn, who became the first female MLA ever elected in the DUP’s homeland of party founder, the late Rev Ian Paisley. After her victory, O’Lynn declared “the age of entitlement is over”.

Ahead of the vote, Northern Ireland’s bishops lamented that for many people the hope of a new era of equality and prosperity promised by the Belfast Agreement had failed to materialise.

They criticised the “consistent failure” of local Assembly and successive Westminster Governments to fundamentally change the dynamics of poverty and social inequality in the region.

“Poverty – the inability to meet our basic needs, especially those of our children, the elderly and those with disabilities, and to enjoy a reasonable standard of life – is an affront to human dignity,” they said.

Resolving the problems of implementing the NI Protocol, and preparing for a possible future border poll, have important implications for economics and identity, they acknowledged.

However, they said these “cannot continue to supersede the urgent need to address the ever-deepening crises of poverty, inadequate access to health services, housing insecurity and the need for a reasonable standard of living in our society”.