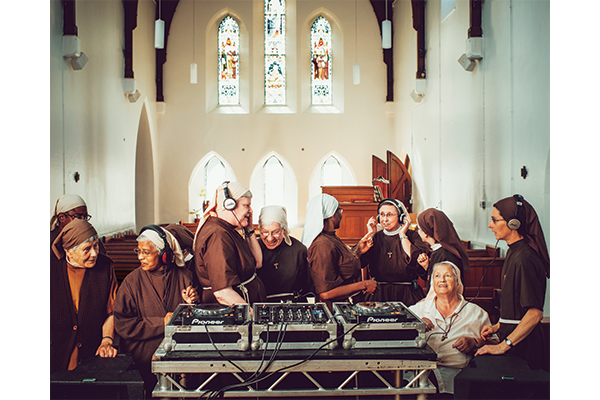 The nuns listen to the playback after a recording session - Photo: © Chris O’Donovan

For the Poor Clare community of Arundel the idea that a record label might be interested in releasing an album of their music started out as a joke. “We heard that someone wanted to come along to Vespers to listen in,” says Sr Gabriel. “And we thought he’d come along, hear us, and we’d never hear from him again.”

But producer James Morgan, who had been alerted to the nuns’ musical abilities by a mutual friend, loved what he heard. He’d been searching for a while for a community of nuns to work with on an album of religious music. Raised a Catholic and educated at Ampleforth, he had always understood the power of the monastic choir. “I was bowled over by their music – it was so beautiful,” he says.

But even with Morgan’s enthusiasm, the path was far from clear. “We took the idea to a community meeting, but I was pretty sure it wouldn’t get through,” says Sr Aelred, the community’s choir leader. The Poor Clares, after all, are rather different from most fledgling musical stars.

“We certainly weren’t hoping to become famous,” laughs Sr Gabriel, a Geordie who entered in 1994 aged 23. “But we have a great tradition of music, and it’s built on a lot of work that’s gone before. We realised it could be a way of passing on something of the essence of our life – what we believe in, and what brings us so much joy.”

“We don’t do missionary work,” says Sr Leo. “But we realised recording an album would allow us to bring the world to us – to invite people into our cloister.”

We’re chatting in the community’s spartan parlour on a weekday afternoon, with the gentle Sussex rain falling outside the window. Sr Aelred, who’s in her seventies (she entered in 1961), Sr Leo, who’s in her sixties (she entered in 1976) and Sr Gabriel wear the coffee-coloured habit of St Clare, and the tau cross – much loved by St Francis as a sign of his life of poverty and prayer – around their necks.

It’s fitting that Decca’s album – entitled Light for the World, and described by its producers as “traditional plainchant with added beats for the headphone generation” – has been released this week, at a time when Pope Francis’ new encyclical, and his visit to sign it in Assisi, has put both his namesake and St Clare in the spotlight. The music, which includes words by both Francis and his close friend Clare, highlights the relationship between the two saints, and includes some of Clare’s writing set to music for the first time.

“Sharing St Clare was a big part of why we wanted to do this,” says Sr Gabriel. “The thing about St Francis and St Clare, our founder, is that you can’t have one without the other. That’s our spirituality, and we want to share it. We know both those saints have a great deal to say that’s meaningful in the world of today. We’ve forgotten that we’re in a relationship with the environment, but Francis and Clare knew it 800 years ago. Think Brother Sun and Sister Moon, Brother Wind and Sister Water.”

Morgan’s Vespers visit was early last year – well ahead of the pandemic – and so, once the sisters had decided they were on board, they started recording sessions. Also taking part was Morgan’s opera singer wife, Juliette Pochin; she wasn’t raised as a Catholic, and had no idea what working with a community of enclosed nuns would be like.

She was pleasantly surprised: the chapel-based recording sessions revealed that, far from being austere or pious, the Poor Clares were a huge amount of fun, with a wicked sense of humour. Pochin was also struck by their camaraderie and support for one another, and, she says, the peacefulness of their world.

“We’d often arrive feeling stressed, in the middle of a very busy week, and it would all float away once we were at the convent,” she says. “I’d say to James: they’re getting something very right that the rest of us are getting quite wrong.”

As the Covid cloud descended, the album recording was completed. “We were due one final session that couldn’t happen,” says Sr Aelred. But enough was in the bag, and Morgan and Pochin’s lockdown project – they’re partners in their business as well as personal lives – was mixing the album. The sisters, meanwhile, embarked on what must surely for them be normal life? That’s pretty much the case, they agree. After all, Poor Clares have been living a socially distanced existence for centuries – although it did mean they couldn’t have visitors.

They’re also quick to point out that it’s one thing to choose a cut-off life, and quite another for it to be enforced. “We’re very conscious that for many people the last few months have been truly hellish,” says Sr Aelred.

For the Poor Clares, the biggest deprivation of the restrictions seemed at first to be that they could no longer attend Mass. “We got ready for Easter and then we thought: we’ve got no priest, what are we going to do?” says Sr Leo. “But then we decided we’d have a special Last Supper dinner with Gospel readings. We decided that instead of washing one another’s feet, we’d wash hands – that was easier for some of the sisters, and because of the pandemic it had a symbolism.”

Easter weekend was the start of a revelation. “That Last Supper took us to a new place,” says Sr Gabriel. “We imagined how it had been that night, and we were there.” As the weeks went by (the nuns went four months without Mass) they realised there were many upsides to the situation. “There was something about it being just us,” says Sr Aelred.

In the absence of a homily, the sisters took turns to share reflections. “It brought to life for us a great truth, that in the early Church the Word was considered no less than the Eucharist,” she says. “I experienced weeks and weeks without Mass and it didn’t impinge one iota with whatever union with Christ I have in my life. We would never have chosen it – we were devastated initially – but later we said: wasn’t that wonderful? And going forward, if there’s no priest available to say Sunday Mass I doubt we’ll ever be ringing round the parishes to find someone, the way we used to do.”

There’s an unexpected advantage, too, in the fact that Light for the World is being released in the midst of a pandemic. “It’s been a period of great anxiety and stress,” says Sr Gabriel. “Going forward we hope our music might be something people can tune in to that will help them find the place of peace we all need.”

The Poor Clares’ album, Light for the World, is out now on Decca Records.