Syria: the nun who exposed the stage-management of public opinion 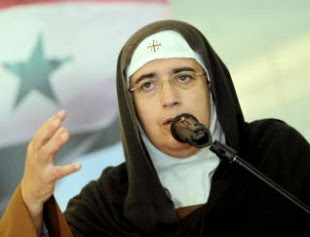 Mother Agnes Mariam el-Salib is a Roman Catholic nun who has lived and worked in Syria for 20 years. She is Mother Superior of St James' Monastery in Qara, and has compiled a comprehensive, compelling and persuasive report (download HERE) into the photographs and videos coming out of Syria being used by President Obama, David Cameron and François Hollande to justify punitive action against President Assad and his forces for the alleged use of chemical weapons.

Read the report for yourself, and make up your own mind: what follows here is mere summary. She evidences photographs and video footage which are being circulated as proof that the Syrian President used sarin gas on his own people. No one doubts that a lot of children died, yet only Mother Agnes appears to have asked why there are only piles of dead children. Where are all their parents? And why do the same bodies in the same clothes keep on cropping up in different locations?

Mother Agnes has been consistently outspoken about the atrocities committed by Western-backed Syrian 'rebels' against Christians and other minorities. Her reputation is considered impeccable, though she is routinely slandered in Western media. She said of the events of the morning of August 21st:


"I am not saying that no chemical agent was used in the area – it certainly was. But I insist that the footage that is now being peddled as evidence had been fabricated in advance. I have studied it meticulously, and I will submit my report to the UN Human Rights Commission based in Geneva."

And so she is doing, and some news outlets - notably Russian state broadcaster RT - are assisting in the dissemination. They say the dedication and determination of this lone nun is putting to shame the US intelligence community. Well, as the propaganda mouthpiece of President Putin, they would say that, wouldn't they?

But leave aside the politicking and powerplay, and listen to the nun, for she is concerned only with the truth. As Assad continues to deny - quite vehemently - that his regime was responsible for the gas attack, Mother Agnes highlights the hypocrisy, deception and double standards among Western governments and the Western media. On August 5th, for example, Western-backed insurgents went on a murderous rampage in several Alawite villages, killing more than 500 innocent civilians. Western governments pretended it did not happen, and the MSM obliged their governments in a conspiracy of silence. Mother Agnes told RT:


What I want to ask first of all is how the international community can ignore the brutal killing spree in Latakia on Laylat al-Qadr early in the morning of August 5, an attack that affected more than 500 people, including children, women and the elderly. They were all slaughtered. The atrocities committed exceed any scale. But there was close to nothing about it in the international mass media. There was only one small article in “The Independent”, I believe.

We sent our delegation to these villages, and our people had a look at the situation on-site, talked to the locals, and most importantly – talked to the survivors of the massacre.

I don’t understand why the Western media apply double standards in this case – they talk about mass murder that the use of chemical weapons resulted in non-stop, but they keep quiet about the Latakia massacre...

A total of twelve Alawite villages were subjected to this horrendous attack. That was a true slaughterhouse. People were mutilated and beheaded. There is even a video that shows a girl being dismembered alive – alive! – by a frame saw. The final death toll exceeded 400, with 150 to 200 people taken hostage. Later some of the hostages were killed, their deaths filmed.

Asked about the persecution of Christians in Syria, Mother Agnes was quick to point out that not only Christians, but also many Muslims are being murdered by the Western-supported insurgents in Syria. She said that the insurgents are emboldened to commit even more gruesome atrocities because they feel they have the backing of Western powers:


I would like to say that if these butchers didn’t have international support, no one would have dared to cross the line. But today, unfortunately, the violation of human rights and genocide in Syria is covered up on the international level. I demand the international community stops assessing the situation in Syria in accordance with the interests of a certain group of great powers. The Syrian people are being killed. They fall victim to contractors, who are provided with weapons and sent to Syria to kill as many people as possible. The truth is, everywhere in Syria people are being kidnapped, tortured, raped and robbed.

So while Dave, Barack and François are obsessed with a few YouTube videos that purport to show a few hundred killed in some sort of chemical attack, there is a cover-up - not to mention a wall of silence - about the thousands who have died in atrocities committed by their 'rebel' allies. At the very least, questions need asking about the 'intelligence' being presented US Secretary of State John Kerry. As part of a scripted speech against Assad, he referred to these photographs (and accompanying videos) and constantly uses the words “our own eyes” and “seeing.” He even asked that the videos be watched by the general public. Mother Agnes has ably assisted:

In the top picture, note the little boy in the red shirt. In the second picture, at least nine children have been transported from Kafarbatna (left) to the Al Marj Region and carefully positioned "without any medical or humanitarian explanation", Mother Agnes claims. These same children are being carted around to different locations in order to exaggerate and distort truth. The report also highlights the fact that there have been no public funerals or announcements about all these dead children. In the footage of one of the few recorded burials, three bodies are not covered in white shrouds, which is a mandatory funeral ritual. "Were these people murdered by the insurgents and disrespectfully buried without the proper rituals as a sign of disdain?"

Whatever position one takes on Syria, it is the responsibility of us all to seek the truth as far as we are able. Mother Agnes Mariam is a humble nun, but her intelligence report is illuminating. It is not, however, really surprising. The shocking thing is that the bodies of dead children are being prostituted to justify military intervention. Sorry, but we are sick of dodgy dossiers.