A Taiwanese archbishop does not believe an expected Vatican-China deal on appointing bishops will lead to the eventual establishment of diplomatic relations. 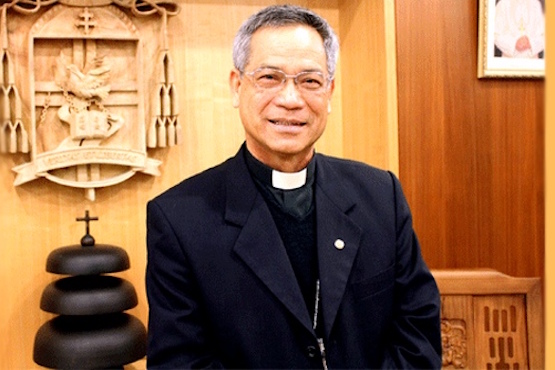 And a Taiwanese religious expert has warned against signing any agreements with China while the country tightens its grip on religious freedoms.

Archbishop John Hung Shan-chuan of Taipei will visit the Vatican in May to update the pope on the church in Taiwan. (Photo supplied)

Archbishop John Hung Shan-chuan of Taipei has claimed that the establishment of diplomatic relations is hyped up once a year but never comes true. "The pope will not give up his flock in Taiwan and China," he said.

The archbishop said diplomatic relations must be built on similar values. Taiwan has helped the Holy See with humanitarian aid, while the Holy See sends cardinals to support related activities organized by Taiwan.

Archbishop Hung will visit Pope Francis in May, with a debriefing every five years, which shows good bilateral interaction, he said.

He told Taiwan's Central News Agency that resolving the issue of bishop appointments, with an agreement expected as early as March, does not mean establishing diplomatic relations.

Taiwan's Foreign Ministry has said the dialogue between the Vatican and China involves religious ministry but not politics, and the Taiwanese government will continue to strengthen its relationship with the Holy See. Sister Beatrice Leung Kit-fun, visiting research professor at Taiwan Wenzao Ursuline University of Languages, told ucanews.com that Taiwan is concerned about the Sino-Vatican agreement and that the country's Foreign Ministry will pay close attention to the development.

Sister Beatric Leung Kit-fun said there is still a long road to travel before the Vatican and China establish diplomatic relations. (Photo supplied)

But she stressed there is still a long road ahead to establish diplomatic relations. "If the issue of bishop appointments is resolved at this stage, other issues such as the Patriotic Association of China will have to be resolved," said the Hong Kong Precious Blood sister.

Sister Leung, however, does not advocate any agreements under the current social and political conditions in China.

Under President Xi Jinping's leadership, China is tightening its grip on religious freedom with the newly revised regulations on religious affairs, banning minors from going to church and suppressing Catholics, Muslims and Protestants, she said.

"That shows the country runs counter to religious freedom," said Sister Leung. "Any agreement signed under such circumstances is contrary to what really happens in China. Signing an agreement is give and take, but now only the Vatican is giving."

Sister Leung said many foreigners do not understand China.

"I have talked to Hong Kong leftists who said that China's politics are like a wordless book, but the Holy See usually knows about China through files, which in many cases are translated into Chinese from Italian and lose their original meaning," she said.

She said Europeans' understanding of communism is very different from that of the Chinese people.

"Europeans regard the communist moderates, holding cups to talk about politics, allowing multi-party politics, and even members of a communist party having religious beliefs, but it is totally different in China, which is a one-party dictatorship," Sister Leung said.

However, some Taiwan Catholics support the Sino-Vatican agreement.

"I personally am optimistic since religion has nothing to do with culture and politics, and some believers think that the development of the Catholic Church will flourish in China in the future," Catherine Zhang, a local Catholic, told ucanews.com.