The battle for Muslim Europe 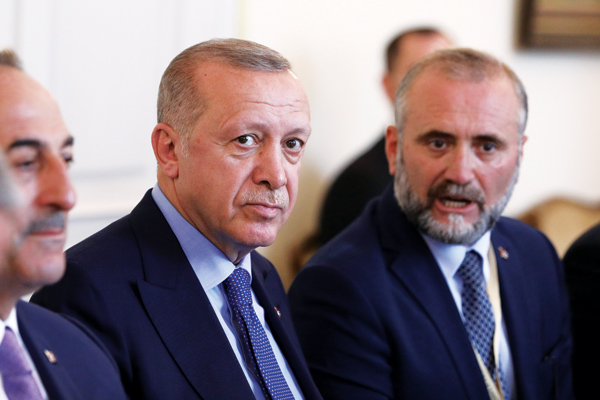 Europeans were safer from jihadist attacks last year than at any point since Islamic State set up its caliphate in 2014, according to European Union-wide police agency, Europol. It may not feel like that. In Europol’s view, the retreat of IS on the ground is likely to give way to an increase in an effort by its rival al-Qaeda to reclaim influence.

But there is a more significant and more subtle struggle going on in Europe – for the hearts and minds of the European ummah, or Muslim community. This battle revolves around the nationalistic vision of Turkish President Recep Tayyip Erdogan, his popularity in the Arab world, his belief that Western values have eroded Islam, the extension of Turkey’s state apparatus for religion abroad, and a marriage of convenience with Muslim Brotherhood networks in Europe.

A recent survey carried out for the BBC showed that the most popular world leader in the Arab world was not the President of the United States or of Russia – or any Arab leader – but none other than President Erdogan. This embrace of a nationalistic, authoritarian, interfering non-Arab in Arab affairs might, at first glance, look odd. But Erdogan’s popularity is no accident or oddity; it is the result of a concerted effort by him to extend Turkey’s influence beyond its borders across the Islamic world, implicitly challenging Saudi Arabia’s leadership of Sunni Muslims.

Erdogan has done this by cleverly co-­ordinating Turkish diplomacy with the interventions of Tika, the country’s foreign aid agency, and Diyanet, the agency that administers Turkey’s Islamic affairs both domestically and internationally. In this way, Turkey has exerted influence through inter-governmental relations but also more directly by influencing religious appointments.

In Bosnia, long an Ottoman vilayet, for example, Turkey’s promises of investment and its successful religious alignment led the leader of the Muslim Bosniaks, Bakir Izetbegovic, to announce: “God has sent [our] nations one person to return them to their religion … He is Recep Tayyip Erdogan.”

Erdogan does not see his sphere of influence as ending in majority Muslim lands but as extending to wherever there are Muslims. Millî Görüs (meaning “national vision”), a long-standing Turkish diaspora religious movement, explains the Muslim world’s decline as the consequence of its imitation of Western values.

Millî Görüs is especially active in Germany, where there is a substantial Turkish minority, but also across Europe, North America and Australasia. Since Erdogan’s rise to power, the German Government has noted an increase in Turkish government command over Millî Görüs as well as the use of Diyanet – through its control of Germany’s Turkish mosques –as a means of monitoring opposition groups, such as the Gülen movement.

There are now signs that Ankara is fostering ties between Millî Görüs and the Muslim Brotherhood (MB), a transnational Islamist movement that seeks to implement sharia law under a global caliphate. The MB has, in places such as Egypt and Tunisia, sought to gain political power through the ballot box, but its brand of confrontational and violent Islam has inspired the most notorious of Islamist terrorist organisations, including al-Qaeda and Islamic State.

These ties were on display at a meeting ­earlier this year in Cologne. The event was organised by Diyanet and its German affiliate Ditib, and held under the auspices of the ­president of Diyanet, Ali Erbas. Diyanet had invited a number of MB luminaries from around Europe, including senior figures of the Brotherhood’s European branch, the European Council for Fatwa and Research, as well as Millî Görüs.

The growing links between these three groups are of increasing concern to the UK’s national security authorities. All these groups are already present in the UK, but little is known about their activities. In the Netherlands, Dutch authorities have already expressed concern over the content of sermons in some Turkish-run mosques, whereas the Germans are particularly concerned with Millî Görüs, citing its strong anti-Western, anti-democratic and anti-Semitic views. The potential threat that an alliance of these three groups poses to the peaceful coexistence of communities in the UK is plain.

The recent reversal suffered by Erdogan in the rerun mayoral elections in Istanbul may not be sufficient to put his radicalising genie back in its bottle. Erdogan may now need to pay more attention to domestic political issues in the run-up to Turkey’s next general and presidential elections in 2023, but it seems unlikely that he will do anything to divorce the apparatus for exerting the Turks’ Islamist leadership from their new MB friends.

The concern for Western politicians and securocrats is that the damage of this linkage is already done and may very well outlast President Erdogan.

Sir Ivor Roberts, a former British ambassador to Yugoslavia, Ireland and Italy, was president of Trinity College, Oxford from 2006 to 2017.