The body in religion: A troubled history

The two have had a complicated relationship ever since the time of the Apostles. 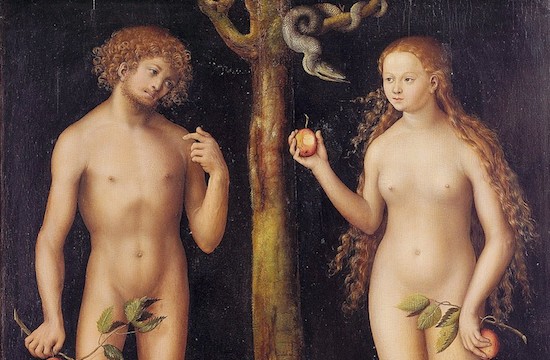 Adam and Eve, by Lucas Cranach the Elder, 16th century. (Photo by ARTOTHEK/COLLECTION)

Although far from unambiguous, the Catholic Church's discourse on the body has long been marked by mistrust, from which it has never completely freed itself.

For three days earlier this month, historians of religion, law and art discussed the reasons for this misunderstanding at the La Tourette convent in Lyon.

"We must kill nature. Refuse your body the slightest satisfaction." Such was the counsel that the French priest, Marie-Eugène of the Child Jesus (1894-1967), received from his spiritual director.

Ideally, and by dint of "practicing mortification," the young Carmelite and future founder of the Notre-Dame-de-Vie Institute could no longer even "feel the needs of (his) body" and, thus, consecrated himself solely to God.

Father Bernard Minvielle, professor of Church history at the institute, noted: "Fortunately, he had other readings that encouraged him to 'question the wisdom of such asceticism' and 'change his perspective'."

It is an undeniable truth: body and religion have long had a complicated relationship.

"The current problems of the Catholic Church, with the crisis of sexual abuse, do not [only] go back to the 1950s," says historian Régis Burnet, who teaches the New Testament at the Catholic University of Louvain.

But why and to what extent are bodies and religion, not only Catholic, in opposition? Exactly when in history did the mistrust set in?

It is this vast subject that the Carrefour d'histoire religieuse (Crossroads of religious history) has chosen to explore for its 28th edition. Meeting at the convent of La Tourette in Lyon from July 11 to 13, historians of religions, law and art discussed it from different angles and emerged with interesting opinions.

For Burnet, the misunderstanding goes back to St. Paul and his first letter to the Corinthians - "Don't you know that you are the temple of God?" - or more precisely to the "first commentator to explicitly quote the text, Tertullian."

On the other hand, Jesus "makes no speech about sexuality or, more generally, about the body and its uses. He is only interested in the body, so to speak, when he is suffering," Burnet recalled in an intervention with a deliberately provocative title: "Why do Christians only talk about sex?

"While the rapprochement with the temple of God seemed to be collective and metaphorical, Tertullian makes an individual and physical reading of it," he noted.

From the condemnation of prostitution in search of "purity," it is finally all sexual relations that are "assimilated to impurity."

The early Middle Ages and the Gregorian reform became a time for a new tightening of the discourse.

"The problem of Merovingian councils is to give an identity to the clergy," recalls the medievalist Jean Heuclin, teacher and honorary dean of the Catholic University of Lille.

"Since they were supposed to serve as models for the faithful, they were based on the monastic model, which was then reserved for an aristocratic elite."

Later, at the turn of the 16th and 17th centuries, the Catholic process of confession-building that followed the Council of Trent led to "increasing pressure from the Church on the individual and the body."

"Modern theologians never stop talking about it, in an extremely detailed way," notes Jean-Pascal Gay, historian of modern and contemporary Christianity in Leuven.

Under what conditions can one be exempted from fasting or attending Sunday Mass? What physical defects can prevent a priest from being ordained? How to frame the cult around a body that has remained "uncorrupted"? All these questions are analyzed by the casuists.

As the Dominican Gilles Danroc reminds us: "We do not have an immediate relationship with our body but [one that is] filtered by representations. However, for a long time, the only representation of bodies was that which came from the sacred texts."

Hence the refusal, at the end of the 19th century, of the priest of Ville-d'Avray to accept in the Catholic cemetery the body of a young deceased Protestant woman.

There have also been lengthy discussions, in women's apostolic religious congregations, on the style of clothing to adopt, recounted by the researcher Anne Jusseaume, who asked: should it "separate from the world" or resemble "that of the women of the people?"

Undoubtedly, as Bruno Béthouart, president of the Carrefour, pointed out in his introduction, "we can only understand the present in the light of the past."

Weekday in Ordinary Time or St Camillu...
Matthew 11:20-24 "But I tell you, it will be more tolerable for Tyre and Sidon on the day of judgment than for you. "