The bringer of light. Gospel reflection for the Second Sunday of Lent 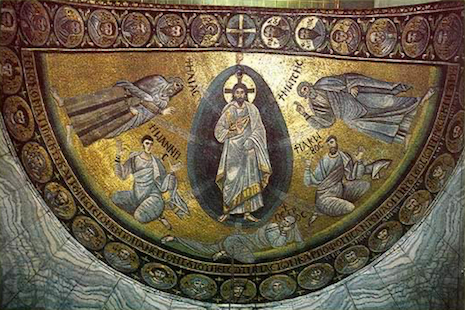 At first, it is just like being at the cinema or the opera, or perhaps even one of those open-air shows with extravagant audiovisual effects.

But first, a description of the visual:

As the curtain rises on Chapter 9, “a high mountain” appears “far off in the distance.” We can just make out a few characters too. One of whom is dressed in brilliant white clothing, gleaming like some of today’s showbiz stars. Then suddenly two new characters appear and start conversing animatedly with the man in white. The first characters are astonished at the sight of the new arrivals, and hardly know what to do.

And then we add the audio, place and time change.

Large clouds are gathered and we see the same characters suddenly in shadow as a voice “came from the cloud” telling them to listen to “my beloved Son.” We can imagine their hearts racing as “they looked up and saw no one except Jesus Himself alone.” Jesus asks them not to tell anyone about the vision “until the Son of Man is raised again from the dead.”

After the curtain, a great suspense follows. What did the voice mean? And what was the meaning of the scene in which Jesus “was transfigured before them?” It could even be described as a “metamorphosis” because this was a major internal upheaval for Jesus.

Several interpretations have been advanced to elucidate this section of the Gospel of Mark. Some say that Jesus was trying to maintain his disciples’ confidence despite the events that he knew were to follow.

The majority of exegetes, including Camille Focant, point out that the Gospel of Mark ends somewhat abruptly at Chapter 16 verse 8, with the scene in which women flee the tomb “bewildered and trembling.”

Long before the end of the story which Focant says leaves “the resurrection open to interpretation,” the scene of the Transfiguration reveals in advance, to just three disciples, the path that awaits everyone: a light amid the heaviness of earthly existence, and the word which, accompanied by the Law (Moses) and the Prophets (Elijah), leads to “resurrection from the dead.”

I remember a brilliant exhibition which took me to the heart of the Transfiguration. Two contemporary artists combined works in glass and clay to create “Earth of Light.” The exhibition was highly topical and relevant in today’s society.

One of the artists was Myriam Kahn, a sculptor and ceramicist. Her work pays homage to the most humble among us, those who are suffering, those who are fighting in resistance and those who protest, sometimes in silence. Yet we are reminded that the places where there is suffering are also places of rebirth and solidarity.

The other artist was Bernard Tirtiaux, a master glass-maker who has created over 500 stained-glass windows. He is also a craftsman of language, in a similar idiom to Myriam Kahn’s clay works. In his pieces, we see the transparency of glass alongside those made in the opacity of earth.

Contemplating these translucent sculptures, I though of the last lines of his great work “Passeur de lumiere” (Bringer of Light – 1993): “I want to create stained glass that bids a gentle kind of brotherhood, a tender union between the light that changes with the passing hours and the stones and the sources of clarity, an embrace from the sky offered to all people and all things, arms outstretched.”

On the Mount of Transfiguration, a bringer of light wanted to send an embrace from the sky to his disciples. He perhaps wanted to say that the light of stained glass could bring to the burned earth a gentle kind of brotherhood both in the present moment and beyond in the ever after.