The Feast of the Transfiguration

“This is my beloved Son, with whom I am well pleased.” 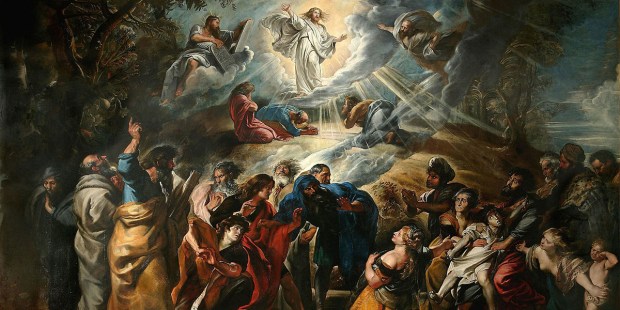 The meaning of the feast

+ Today’s feast recalls that privileged moment when Jesus, accompanied by Peter, James, and John, revealed his glory and the voice of the Father proclaimed, “This is my beloved Son, with whom I am well pleased; listen to him” (Matthew 17:5).

+ The readings and prayers for this celebration teach us how Jesus was the fulfillment of the prophets’ visions and of how we are invited to share in the glory of Jesus as adopted daughters and sons of our Heavenly Father.

For prayer and reflection

“Let us run with confidence and joy to enter into the cloud like Moses and Elijah, or like James and John. Let us be caught up like Peter to behold the divine vision and to be transfigured by that glorious transfiguration.”—Anastasius of Sinai

O God, who in the glorious Transfiguration
of your Only Begotten Son
confirmed the mysteries of faith by the witness of the Fathers
and wonderfully prefigured our full adoption to sonship,
grant, we pray, to your servants,
that, listening to the voice of your beloved Son,
we may merit to become co-heirs with him.
Who lives and reigns with you in the unity of the Holy Spirit,
one God, for ever and ever. Amen.

(from The Roman Missal)