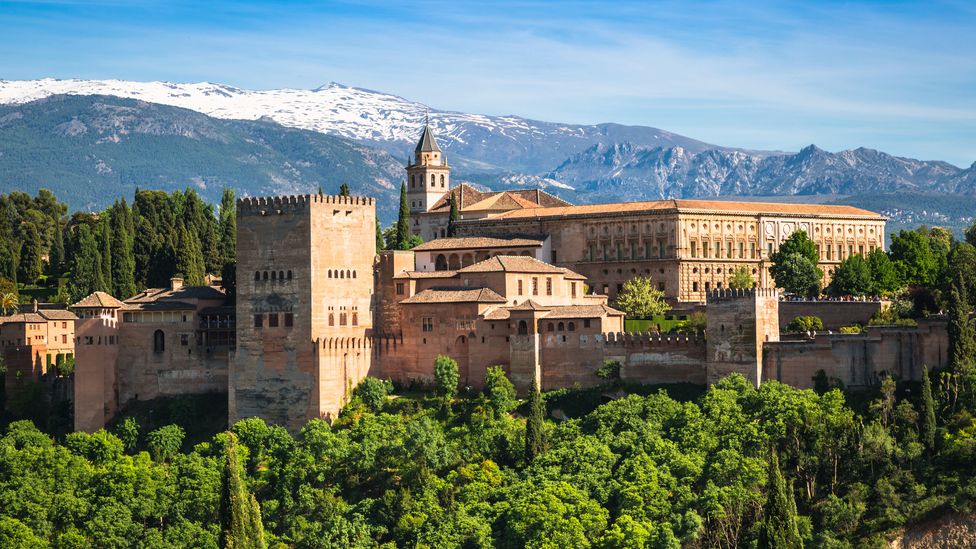 At Granada's famed Alhambra palace, a 1,000-year-old feat of hydraulics still impresses engineers today. Water is everywhere in Granada's ornate and lavish Alhambra, a 13th-Century palatial complex that's one of the world's most iconic examples of Moorish architecture. It flows in channels that cool the buildings; spurts from fountains in grand rooms and charming courtyards; and sprays in such a way that, from certain angles, it perfectly frames majestic arched doorways. The same intricate system brings colour to the famed gardens of the Generalife, the former summer palace next door.

At the time, this was one of the most sophisticated hydraulic networks in the world, able to defy gravity and raise water from the river nearly a kilometre below.

The 1,000-year-old feat still impresses engineers today: in an essay on key moments in the history of water in civilisation, Unesco's International Hydrological Programme noted that "modern water technology is indebted to the legacy of [these] water gardens and bath houses", which were once only enjoyed by the wealthy and powerful, but today have made baths and private home gardens affordable and practical.

For millennia, major cities have sprouted on the banks of rivers, the shores of lakes and the coastlines of seas. This was true too of the great Kingdom of Granada, which developed along the Darro and Genil rivers in what would become Spain's autonomous community of Andalusia. To the Islamic rulers who controlled this and other parts of Spain for almost 800 years, water played an integral function in society, not only for survival, but for religious and aesthetic purposes too.

"In Islam, water is the origin of life, it's a symbol of purity and acts as a purifier of both the body and the soul; it is considered pious," said Rocío Díaz Jiménez, general director of the Board of Trustees of the Alhambra and Generalife.

Public fountains, decorated with ceramic tiles, were plentiful in the streets of Andalusian cities. They were installed next to mosques for ablutions, or near the city gates to quench the thirst of travellers. Even at home, water was the focus. "It was rare for an Andalusian patio not to have a central water feature, no matter how humble it was – whether it was a pool, a fountain or a basin," Díaz said. "Water is also part of the essence of the Alhambra – a fundamental element for its existence."

But that wasn't always the case. Historians believe the Alhambra was commissioned as a fortress in the 9th Century by a man named Sawwar ben Hamdun, during the wars between Muslims and Christians who converted to Islam. However, it wasn't until the 13th-Century arrival of Muhammad I, the first king of the Nasrid dynasty – which would rule from 1230 until the Spanish Catholic conquest of 1492 – that engineers overcame the challenge of the Alhambra's elevated location on 840m-high Sabika Hill and transformed it into a habitable, 26-acre palatine city with access to fresh running water.

Visitors can still see part of the Acequia Real today in the Patio de la Acequia, where it is framed by arcing jets of water. (Credit: amoklv/Getty Images)

While earlier Moors had been using simple acequias, or small canals, in surrounding areas for centuries, based on irrigation techniques they'd learned from the Persians and Romans during their expansion through the Mediterranean and Iberian Peninsula, the great innovation of the Nasrids was to design one that would carry water 6km from the nearest river, and then uphill to their elaborate complex of courtyards, gardens and bath houses.

As Díaz explained, "Everything indicates that the Nasrids were the first to bring water to the red hill of Sabika and make it habitable."

The crux of their innovation was the Acequia Real ­– a 6km canal that drew from the Darro River. An azud, or dam, was constructed to divert the flow of the river upstream, and the power of river transported it along the hillside before distributing the water into smaller channels. Waterwheels, or na'ura, were added to raise the water to different levels. It was then moved through a complex hydraulic structure consisting of large pools, cisterns and a multitude of pipes in a perfectly interwoven network, before being transported into the Generalife gardens and on to the Alhambra palace itself via an aqueduct.

Visitors can still see part of the Acequia Real today in the Generalife's Patio de la Acequia, where it runs down the centre of the courtyard framed by arcing jets of water. "The flowing water gives the Alhambra a magical feeling," said tourist Krista Timeus, who was visiting from Barcelona in March. "My favourite sight was seeing the palace and the sky reflected in the long pools of the inner courtyards. Our tour guide told us that for the Nasrids, having water as a central theme in the palace was an important symbol of status and the richness of the area, so it makes sense that it's a central element of the architecture. It's hard to imagine the place without it."

Over time, the palace-city's irrigation system was expanded: more water wheels and albercas (large pools) were built, and cisterns were added to collect rainwater. Later on, another channel was forked off the main Acequia Real, called the Acequia Tercio, which brought the water up even higher and irrigated the orchards above the Generalife.

The Fountain of the Lions consists of a large dish held up by 12 white mythical lions. (Credit: EunikaSopotnicka/Getty Images)

One of the cleverest examples of the Alhambra's waterworks is in the Palacio de los Leones. In the centre of a large, serene courtyard, the Fountain of the Lions stands gleaming in white marble, surrounded by ornately carved columns. The fountain consists of a large dish held up by 12 white mythical lions. Each beast spurts water from its mouth,feeding four channels in the patio's marble floor that represent the four rivers of paradise, and then running throughout the palace to cool the rooms.

Díaz described the fountain as the epitome of the system as a whole. "The Fountain of the Lions brings together the knowledge of a technical tradition, the result of studies and constructive experiences over many centuries, which allowed the creation of the Alhambra," she said.

While the Acequia Real was continuously updated and added to over the centuries, other acequias in the area fell into a state of disrepair in the 20th Century and stopped working. This was true of 11th-Century Aynadamar channel, the oldest acequia in the city. Meaning "Fountain of Tears", it allowed for the development of Granada's medieval Albaicín district, part of the area's Unesco World Heritage status.

This year, José María Martín Civantos, a professor at the University of Granada who specialises in medieval history and ancient irrigation techniques, and the Fundación Agua Granada (a non-profit organisation aimed at preserving the environment and promoting sustainable development) are leading a project to restore the Aynadamar channel, continuing the irrigation legacy of the Moors.

The intricate system brings colour to the famed gardens of the Generalife, the former summer palace next door to the Alhambra. (Credit: Juana Mari Moya/Getty Images)

Even today, with all our modern technology, there is still much that we can learn from these ancient water systems. That's why, as Civantos explained, "The work will be carried out according to traditional customs, respecting the original layout and its heritage, as well as restoring the channel and its environment." The hope is that the project will have an impact beyond the Alhambra too. Sebastián Pérez Ortiz, managing director of the Fundación Agua Granada, said that the water will irrigate areas with semi-arid ecosystems and the Aynadamar will become an ecological corridor for the development of the native vegetation and a habitat for many animals.

That potential for knowledge – and for environmental benefits – is also why the scientists of the International Association for Hydro-Environment Engineering and Research will hold their World Congress in Granada this year, further examining – and reinforcing – the city's important relationship to water in the past, present and future. Scientists at the congress will be studying these ancient irrigation systems and associated ecosystems, as well as the elaborate hydraulic system of the Alhambra to see what they can learn today.

"The ingenious techniques of the Moors show us that innovation and technology do not have to be at odds with conservation, much less with sustainability," explained Civantos. "Irrigation systems provide us with a vast ecosystem that many of our cultural landscapes depend on."

Ancient Engineering Marvels is a BBC Travel series that takes inspiration from unique architectural ideas or ingenious constructions built by past civilisations and cultures across the planet.