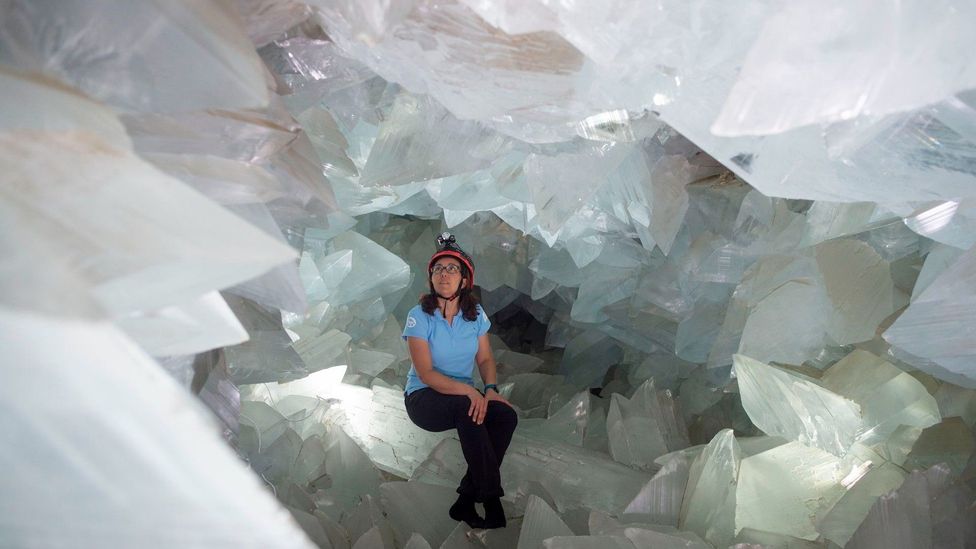 As Mila Carretero, geologist and coordinator of the Pulpí Geode, explained, a geode is a cavity inside a rock that is covered with crystals. Sitting against a backdrop of oversized crystal spars, she broke open a tiny rock with tiny gems inside, to show a comparison. "It's the same as the one I have behind me, only this one is a super-sized version," she said with a laugh as she pointed over her shoulder.

The Pulpí Geode is eight metres wide, two metres high and two metres deep. "When it comes to a geode, by definition, this is the biggest ever discovery," she noted, adding that Pulpí is not to be confused with another crystal marvel, the Naica Mine in Mexico, which has larger spars (15m long compared to Pulpí's two metres), but which is a cave lined with crystals rather than a geode.

The geode here in Spain was originally spotted by miners in the Mina Rica, a silver mine which operated from 1873 to 1969. But it wasn't until years later, in 1999, that geologists found it again and brought it to the world's attention.

"When [the original miners] blasted this rock and found a geode, they probably got upset because they didn't like finding these crystals," said Carretero. "It meant extra work to get rid of them. They weigh a lot and were not profitable."

Though scientists are still researching it, they believe the whole area was once underwater. At a certain point, volcanic activity fractured sedimentary rocks and filled them with hot fluids. When the fluids cooled, the crystals started forming.

Inside the world's largest crystal 'cave'

Geologists have found that the anhydrite (the mineral that formed the rocks) in Pulpí is from the time of the dinosaurs about 250 million years ago, but they are uncertain of the age of the gypsum crystals themselves because they contain very little impurities that can be dated. Their estimate is that the crystals started growing less than 2 million years ago. "The slower the crystal grows, the larger its size. And the more perfect the crystal is," said Carretero.

The mine was opened to the public in 2019, after some rubble was cleared and safety measures, such as a 42m emergency staircase, were installed. In the process, workers found items left behind by the original miners, including cigarettes, jackets, rubber sandals, beer bottles and scratches on the wall tallying their daily quotas.

More than 100,000 people have visited the geode so far, and Carretero's team is carefully monitoring temperature, carbon dioxide and humidity to ensure the crystals' safety. "More than the carbon dioxide [from human interaction], the humidity is what can really harm the crystals," she said. "Because if a layer [of moisture] coats the crystals, they tend to lose their transparency."

Pulpí's crystals, however, remain remarkably transparent, and visitors and scientists alike continue to be awed by the natural phenomenon. "I couldn't put into words what I felt when I saw it," said Carretero. "It's indescribable because it gives us a sense of how small we are. Look at what nature has given us."