Week-long event brings together young people from Claretian youth organizations from across the region. 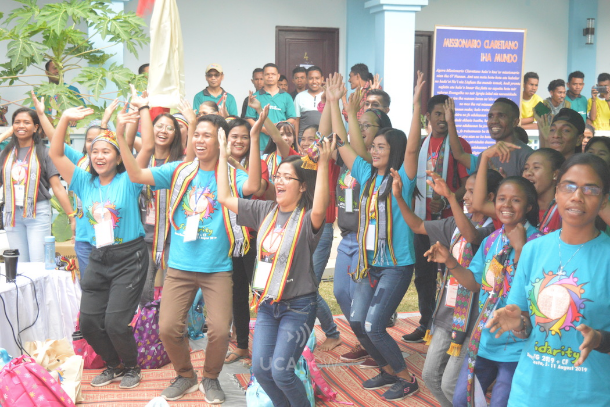 Young Catholics from several Asian countries sing and dance at the start of the 3rd Asia-Claretian East Youth Gathering on Aug. 6 in Dili, Timor-Leste. (Photo by Thomas Ora/ucanews.com)

Young people from Asian countries served by Claretian Missionaries have gathered in Timor-Leste for a week-long assembly to renew their commitment as Christ’s witnesses.

The Asia-Claretian East Youth Gathering is taking place from Aug. 5 to 11 in the Timor-Leste capital Dili.

The gathering is held every two years and is the third such event since the first was held in the Philippines in 2015 and the second in Indonesia, in 2017.

"We are here united as Asians … to establish the true character of Catholic youths, as the bearers of the Christian message and witnesses to the joy of the Gospel," Father Talok told ucanews.com.

He said the theme ‘The Solidarity of Christ Impels Us: Go, Sell, Share and Follow’ highlights the realities young people in Asia face, such as poverty, unemployment, migration, human trafficking, drug addiction, intolerance, terrorism, and the environment.

It also follows up Pope Francis’ message during World Youth Day 2019 in Panama, in which he invited young people to be in solidarity with current realities and to become icons of hope, he said.

"I hope this event will inspire Timor-Leste youths to grow in holiness and move forward," he said.

He said the youths were being encouraged not only to become preachers on the internet, but to bring Christ into the real world.

“They will be guided through activities that involve prayer, coaching, games, animation, and cultural performances," he said.

Bishop Virgílio do Carmo da Silva of Dili welcomed the youths on Aug. 6, telling them to overcome the challenges of globalization and a society where young millennials are accused of “having no empathy and being selfish.”

"Solidarity with Christ means that Christians must share and give their lives to others in need of help," he said.

He hoped that Timor-Leste youths can learn from the gathering so they can transform communities where they live.

Gregorius Falo, 25, an Indonesian participant from West Timor, said he joined a Claretian Youth Organization while in elementary school.

"This is my first such gathering and it strengthens me to continue bringing the message of hope to other people,” he said.

Agostinho do Rego, 23, from Covalima district, south of Dili, said he joined a Claretian youth group after meeting missionaries at the Immaculate Heart of Mary Church in Fuiloro.

Claretian missionaries, despite various challenges, remain faithful to their mission of serving their people, he said.

"They will visit those in need no matter what the circumstances — even foul weather," he said.

“They continue to amaze me,” said Do Rego, whose father was a catechist and worked closely with Claretian missionaries.

Meeting youths from other countries has been enlightening and has motivated him “to be a light for others” in his parish.

The Congregation of Missionaries, Sons of the Immaculate Heart of the Blessed Virgin Mary or Claretians are a community of Catholic priests and brothers.

Founded in 1849 by Anthony Mary Claret they are present in more than 65 countries.

The Claretian Congregation arrived in Timor-Leste in May 1990 before independence and provide education, as well as social and pastoral care in Dili and Maliana dioceses.