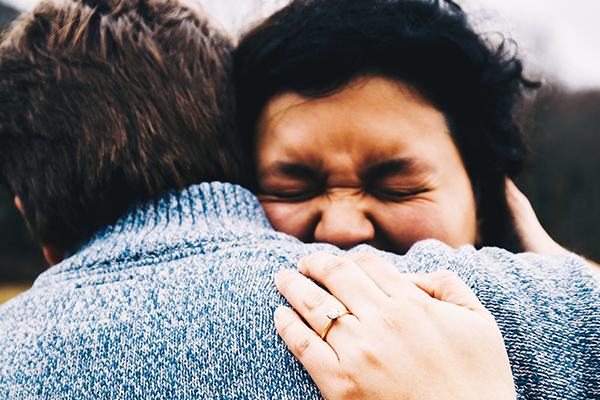 In the second of two reflections for a time of conflict, hurt, and anguish, the former Master of the Dominicans invites us to let go of the burden of the past and to rejoice in forgiveness.

To be fully alive is to be able to hope, and to forgive. The Eucharist is an audacious expression of hope in defiance of a world that seems bent on its destruction. But to live fully with hope now, in this doom-laden time, we need also to forgive. We begin every Eucharist by remembering our sins and asking for forgiveness. This is an odd way to start a celebration! The cup blessed at the Last Supper was “the new and eternal covenant poured out for you and for many for the forgiveness of sins”. Approaching the climax, we behold the Lamb of God who takes away the sins of the world. Judaism and Islam both believe in a merciful God, but Christianity is unique in having forgiveness at its very heart.
But here we come to a difficulty. Many young people are not attracted to a religion which goes on and on about sin. People do not want to come to church to be told that they are terrible sinners and so need forgiveness. It sounds crushing and depressing. Life is tough enough without always being told that I am a sinner. It is as if you have first to convince people that their clothes are dirty so that they will buy your brand of washing powder. Which is why, when I preach, I almost never use the word “sin”.
People often claim that the young have lost their sense of sin. But this is a mistake. It has shifted. There is a whole new way of understanding sin. In fact, the young have a very high moral idealism. They are far kinder and more tolerant than my generation ever was. There is a deep sense of the equality of all women and men. Prejudice against people on the grounds of their colour or their sexual orientation is abhorred. There is an acute sense of the damage we are doing to the environment and of the horror of sexual abuse.

But this idealism can be crushing. How can we bear these ideals if there is no forgiveness for all our failures? The late Cardinal Francis George, Archbishop of Chicago, once wrote that in today’s world “… while practically everything is permitted, practically nothing is forgiven”. The atmosphere is heavy with accusation. The world is divided into victims and perpetrators. A single mistake, one moment of madness, will stay on the record forever. Social media forgets nothing. We are tainted by any association with the wrongdoings of our ancestors. Statues are torn down, schools and buildings and roads are renamed. Former heroes such as Mahatma Gandhi and Aung San Su Kyi are denounced as villains. We must be pure, untainted, uncontaminated.

This is the “purity spiral”. People work harder and harder to disassociate themselves from the impure, the offensive. So our young are weighed down with the failure to achieve moral perfection, and often have no conception of forgiveness. And the authority of the Church to preach forgiveness is profoundly compromised by the sexual abuse crisis. Who are we to tell other people that sins must be forgiven? How dare we?

When you become a Dominican, you lie on the ground at your clothing and the Provincial asks you: “What do you seek?” And you answer: “God’s mercy and yours.” You ask to join a community founded on mercy. At the heart of your formation is learning what it means to give and receive mercy. That does not mean forgetting – “Oh, I am awfully sorry that I murdered the novice director”; “Oh, we all get carried away. Let’s forget it”. Forgiving means something very different.

There is only one great act of forgiveness, and that is Easter Sunday. On Good Friday we put Love Incarnate on a cross. We rejected the God who is love. The cross was a barren, sterile and meaningless act of destruction. But on Easter Sunday, Jesus met Mary Magdalene in a garden. This was God’s irrepressible springtime. The dead wood of the cross flowered. In that moment, everything is forgiven. We do not need to forget.

Let me give just two examples, both of them Dominican friends. Pierre Claverie was a French Dominican, a bishop in Algeria. Pierre devoted his whole life to dialogue with Islam. When that lovely country became swept up in mad violence in the 1990s, he knew that it was likely that he would be murdered, like the Trappist monks portrayed in Of Gods and Men. One day he returned to Oran, where he was bishop, from a meeting in Algiers. The terrorists were waiting. He entered his house with a young Muslim friend who had collected him from the airport. A bomb was exploded and their bodies were pulverised. When I arrived for the funeral three days later, I found a sister still collecting the remains in a spoon. The brutal destruction of two friends, one Christian, one Muslim.

A thousand Muslims came to Pierre’s funeral. At the end a young Muslim woman stood up and said that she had left her faith but Pierre had brought her back. He was the bishop of the Muslims too. Everyone in the congregation began to say as well: he was the bishop of the Muslims. When I went to Oran for his beatification, I found his tomb covered with flowers left by Muslim and Christian pilgrims. That is the fertility of forgiving, not forgetting. Isaiah proclaimed: “The wilderness and the dry land shall be glad, the desert shall rejoice and blossom; like the crocus it shall bloom abundantly and rejoice with joy and singing … then shall the lame man leap like a hart, and the tongue of the dumb sing for joy. For waters shall break forth in the wilderness, and streams in the desert” (Isaiah 35:1, 6).

Another example, another friend. Sister Pauline Quinn OP was born into a wealthy non-Christian family in Hollywood, but she suffered terrible sexual abuse. She was sent to many institutions where she was raped repeatedly, including by the doctors. She began to cut her body. Her arms were covered with scars. She became a vagrant living on the streets for many years. And then she met a Catholic sister, and also a dog, a German shepherd called Joni. They gave her safety and affection for the first time. She was received into the Church and eventually accepted as a Dominican sister. Her life became wonderfully fruitful. She worked with victims of war from all over the world, enabling them to have prosthetic limbs, finding them jobs. She worked with prisoners, training them to train dogs to help the disabled. Grace triumphed over the ugliness of sin, and her life became beautiful. She died of cancer two years ago.

Sometimes the spring of forgiveness takes a long time to arrive. One cannot force it. We see this especially with forgiveness for sexual abuse. We pray every day, “Forgive us our sins as we forgive those who sin against us”, but we cannot demand of other people that they forgive. That would be another form of abuse. When people are lost in what Stephen Cherry calls “the wilderness of hurt”, they must be given time for forgiveness to emerge. The wounds of decades, even centuries, cannot be healed at our command, any more than can our wounded bodies. My surgeon tells me it will take 18 months for the wounds of my last operation to remove a cancerous tumour to fully heal. Think of the time that will be needed before the Ukrainian people will be able even to begin to contemplate the forgiveness of those who are even now bringing about their appalling suffering. Forgiveness is inseparable from patience.

So becoming forgiving people is not about being forgetful. It is opening the door for God’s creative grace. It is inseparable from learning to talk to the other person who has hurt you. Unfreezing the sea; opening the way for healing words; letting the barren desert of hurt be touched by spring.

We should remember that neither the person who is hurt nor the one who hurts is defined by the act. They should not be trapped by the labels of “victim” and “perpetrator” forever. There is a fraternity of Lay Dominicans in the US whose members are mostly people in prison for murder. They may have committed murder but they are not forever imprisoned by the definition, “murderer”. I loved meeting an old Mafia hitman who had killed many people but who now recites his breviary. He told me he felt like a Dominican enclosed nun. I am proud he is my brother.
We share our faith explicitly by word or implicitly by how we live. We believe that our faith is true, and human beings can only thrive in the clear air of the truth. The Lord of the truth summons us to live now. And we do this by letting go of the burden of the past and opening ourselves to promise of the future. If this frees us to live, people may wonder why. We may even be on fire a little, like the burning bush that Moses saw. He then said, “What’s going on here? Let’s have a look!”

This is the second of two reflections drawn from a talk given in May to young men and women discerning their vocation to the
religious life.

Timothy Radcliffe OP is a former Master of the Dominican Order, an itinerant lecturer, broadcaster, preacher and retreat-giver. His most recent book is Alive in God: A Christian Imagination (Bloomsbury Continuum).