Turmoil on stock markets persists.- So what do the fluctuations mean for you? 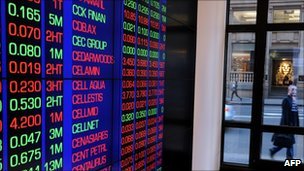 All those red numbers on stock market boards may appear to be a strange and mysterious mix of data to many people.

But the story they are telling at present will be affecting anyone with a pension, those considering retirement, savers with Individual Savings Accounts (Isas), and even money set aside by families for the cost of children's university education.

With shares being sold off across the world, the FTSE 100 index in the UK fell to a lower level on Friday than it was at the end of January 2008 - although it later showed signs of recovery, before falling again.

So what do the fluctuations mean for you?

Surely all those worried looking traders have nothing to do with me?

Anyone who has money invested in some way or another could be affected by the continuing turmoil on the markets.

A lot of money is invested in the stock market by pension funds, of which more later, but the effect this is having on the banks could affect anyone hoping for a loan or a mortgage.

If banks continue to write down debts from Greece, and other EU countries, then they might have less to hand out in home loans. However, in the UK, they have been encouraged by the government to continue lending.

Millions of people in the UK also have money put away in a stocks-and-shares Isa. A total of £108bn is invested in these Isas in the UK.

It has always been the case that these investments can go down as well as up in value, but anyone hoping to cash some of this in because they are financially stretched will most likely be taking a hit.

Insurance companies also invest in the stock market, so there could eventually be an effect on the cost of premiums and the products available. However, these companies do have large financial cushions in place to cover volatility.

Anyone receiving a bonus in shares might find they are not worth as much as expected.

So is it time to panic then?

No. Investments are generally for the long term, so these short-term fluctuations should not worry people too much. 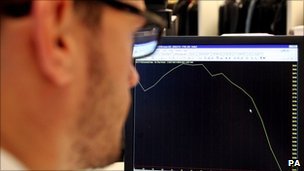 But most people only get an annual update on their investments and keep their money in for many years - either for their retirement or to hand down in inheritance.

"This could lead to some panic. People do not pay so much attention when values go up," says Anna Sofat, of financial services company Addidi.

"They should not risk selling out at a time that is not good for them."

Andrew Gadd, head of research at the independent financial advisers, the Lighthouse Group, says: "People should not be panicked out of the market."

What about somebody who is about to retire?

About 60% of an average pension fund is invested in shares, so this affects a lot of people's financial futures.

But the situation is most acute for those with personal pension funds and on the cusp of retirement. They will be looking to pull money out of the stock market in order to buy an annuity - a pension income for the rest of their lives.

And the annuity they can get from an insurance company is being affected by the way major investors act.

The annuity rates being offered can be affected by investors who, worried about global shares, are looking to buy safer investments instead. They are going for gilts, so the price of those is rising and the yields falling. This, in turn, affects annuities.

"The yields on long-dated gilts are falling like a stone and it can only be a matter of time before insurance companies start cutting their annuity rates," says Billy Burrows, of the Better Retirement Group.

Employees with a workplace final-salary pension are protected from stock market volatility.

But if the value of shares falls for a long time, then some businesses might consider closing down these schemes quicker than they otherwise might have done.

How long will this volatility go on for?

Now that is a question that a lot of people want to know the answer to.

The background to this is that investors are worried about both the eurozone debt crisis and the weak US economy. It is not clear how long this will go on for.

But financial advisers are suggesting that small investors sit tight at the moment.

"People should be looking at the long term," says Adrian Lowcock, senior investment adviser at Bestinvest.

Anna Sofat points out that thin trading in August, when many traders are taking a holiday, can also accentuate movements on the markets.

"Investors should hold on for a bumpy ride for the next few weeks, but I expect there will be some sanity back in September," she says.

But Mr Gadd says he expects volatility for six months, so investors should ensure their portfolio is diverse.

Should I be worried about my savings?

Remember that savings, unlike investments, are not going to fall as a result of stock market moves.

Interest rates are low for savers, but there is now greater protection for their money than there was at the height of the banking crisis.

Full compensation up to £85,000 per saver, per authorised institution is paid to those who deposit money in an authorised bank or building society if it goes bust.

For investment products, the first £50,000 is covered per person, per firm.