Marie Malzac - The Tablet - Thu, Jul 6th 2017
The Synod of the Greek Catholic Melkite Church is meeting this week to elect a successor to Patriarch Gregory III Laham and put an end to a period of division. 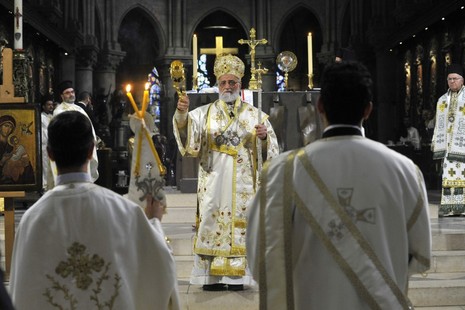 A year ago, a grave crisis shook the Greek Catholic Melkite Church, one of the largest Eastern Catholic churches.

Initially planned for last June, the Melkite Synod was postponed owing to a lack of participants as a dozen bishops boycotted their patriarch in a sign of opposition to Patriarch Gregory III Laham, 83, who has held the position for 17 years.

Among other criticisms, the bishops accused him of mismanaging the real estate assets of the patriarchate and called for his immediate departure.

Although he has worked closely with his followers, particularly since the beginning of the Syrian conflict, he nevertheless found himself in the midst of growing opposition within the Synod of the Byzantine-rite Melkite Church.

The Church has been in communion with Rome since the 18th century.

After months of open conflict and contradictory rumors as to whether he would continue or step down, Patriarch Gregory finally submitted his resignation in a bid to calm internal tensions.

Pope Francis accepted his resignation in May although the Lebanese press has revealed that Patriarch Gregory would have preferred for his resignation to take effect in December.

The Synod is meeting from June 19 to 23 in Ain Traz, Lebanon, to elect his successor.

Among the favorites to become the new patriarch are Melkite Bishop Georges Bakouni of Galilee and the current interim administrator, Archbishop Jean-Clément Jeanbart of Aleppo.

Other names mentioned include Auxiliary Bishop Joseph Absi of Damascus and Bishop Elie Haddad of Sidon, who played a mediating role during the crisis.

The new patriarch’s great challenge will be to reunite the Greek Catholic Church after this difficult period. Fortunately, the situation seems to have improved in recent months.

In a sign of the Vatican’s concern, an exceptional Synod meeting took place in February in the presence of its nuncios to Lebanon and Syria, respectively Archbishop Gabriele Caccia and Cardinal Mario Zenari.

The bishops ensured that the dialogue was frank and open, which in turn made it possible to envisage “solutions” to the crisis in a spirit of “fraternal reconciliation".

However, the crisis did not take long to break out again. Not long after, Patriarch Gregory was angered by speculations about his resignation being published in the press.

Archbishop Jules Joseph Zerey, patriarchal vicar in Jerusalem, believes the new patriarch will need to understand how to work as part of a team, as well as to maintain detachment in financial matters and act to protect Byzantine traditions.

Preparation through fasting and prayer

Observers have suggested that age will also be a determining factor in the election. Although it is canonically possible for a new patriarch who is over 75 years of age to be elected, voters will probably choose someone younger, but also not too young, to ensure that he does not stay in power for too many years.

The priorities of the new patriarch will include dealing with refugees, a major challenge in itself.

The “quarrels” in Egypt arising from disagreements with Patriarch Gregory will also need to be resolved.

“The local community is suffering greatly owing to the current situation,” says the Archbishop of Jerusalem, who is himself of Egyptian origin.

Once elected, in the presence of the apostolic nuncio in Lebanon, the new patriarch will be confirmed by Pope Francis.

The faithful of the Melkite Church, which has a major presence in Syria, Lebanon and the Holy Land as well as in the diaspora, are preparing for the election of their new pastor by fasting and prayer following an appeal by the outgoing patriarch.

For many of them, it is a particularly sensitive political situation.