Why can't we imagine ourselves getting old? 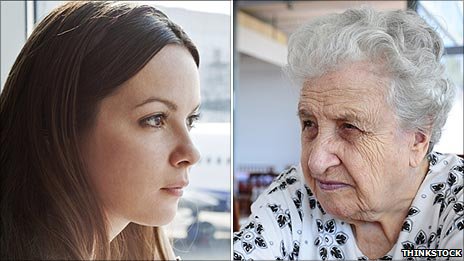 A girl born in the UK today has a one-in-three chance of reaching 100 and a boy has a one-in-four chance. But can people really comprehend what that means?

The biblical figure Methuselah supposedly lived for 969 years. But old age isn't for everyone as the Who demonstrated in their 1965 hit My Generation with its provocative line "hope I die before I get old".

Nearly a half century later, young Britons are facing - if not the fate of Methuselah - then a life of scarcely believable length.

It's not just the recently born who will live longer. The projections from the Department for Work and Pensions suggest that more than a fifth of women currently aged 40, and about 14% of their male equivalents, will reach their 100th birthday.

Clocking up three figures has previously been regarded as remarkable enough to merit a telegram from the Queen. But soon she or her successor may have to raise the age requirement.

By 2066, there will be half a million centenarians and some even think the DWP figures err on the conservative side. A study in the Lancet last year suggested that half of babies born after 2000 will reach 100.

The practical issue is pensions. "We simply can't look to our grandparents' experience of retirement as a model for our own," says pensions minister Steve Webb. "We will live longer and we will have to save more."

Our ageing populations require a revolution in the way that social and economic policy operates, according to Joseph Coughlin, an age researcher at MIT. "We need a vision that says ageing is not just about the frail," he told the Financial Times last month. "Ageing is about all of us, and how we keep people productive for as long as possible."

The challenge is as much conceptual as practical.


As Leon Trotsky put it: "Old age is the most unexpected of all the things that happen to a man." Behavioural thinkers believe that most people are incapable of imagining themselves getting old, one reason why people fail to invest sufficiently in a pension.

The theory of "discounting" - delaying payment in return for a bigger financial reward - has been used to explain this.

In one US experiment, researchers put five-year-olds in a room with a marshmallow. The children were told that if it could wait 15 minutes without touching it, they would be offered a second marshmallow. Despite the inducement, the vast majority of the children ate it before the time limit was up.

It underlines the idea that humans distinguish between our present and future selves. "It's been shown that people's identification with themselves diminishes as they look into the future," says Daniel Read, professor of behavioural science at Warwick Business School. "It comes down to not caring about ourselves in the future."

Living longer is one thing, but the quality of the extra years is what counts, he believes. And no-one knows if these extra years will be spent working for longer and being mentally and physically active, or finding oneself frail and bed-ridden.

"We may not be able to expect people to work much longer than they already are," Read warns. "If the productive years remain about the same but the lifespan expands that becomes a major issue for society."

The novelist Martin Amis argued last year that the answer might be "euthanasia booths on every street corner". As he explained at a public Q&A session the swelling ranks of the elderly would not only be a drain on resources for younger generations, but lead to an undignified end to one's life.

The biologist Lewis Wolpert, who wrote about old age in his recent book You're Looking Very Well, dismisses Amis's position.

He says it wasn't until he retired, aged 75, that he first felt old. Indeed our definition of old, advances further up the age range as we do. Now aged 81, he has accepted he counts as old.

"The point about age is that things change," he explains. "The most striking thing is that in the street everyone passes me now - I've slowed down."

He has begun to forget things, names and faces, and Alzheimer's is a real fear. "I do think about death every now and again. It's not terrible being old. But I miss work and being around colleagues and students."

He is sceptical about the latest figures. But if a significant number of the population really do start living past a hundred, it may not be something to celebrate. "I don't think they will be fulfilling lives. Who's going to employ you at 80 or 90?"

He never expected to get old. "As a young man I never gave getting old a moment's thought." But this is no bad thing, he believes. There is no point worrying about ageing when you're young. Best to enjoy your youth and deal with the aches, pains, and memory loss when it happens.

"The point of evolution is preserving DNA. A chick is the egg's way of making another egg. Once the DNA molecule is passed on, the chick becomes almost irrelevant to the process."

Within the animal kingdom, apart from a few species like elephants, extreme old age is a rarity. Even species we think of as being genetically close to ourselves, like chimpanzees, die young through fighting each other, lack of food or attacks by predators.

But humans are going through scarcely credible advance in longevity. As primitive hunter gatherers, our life expectancy was in the 20s or 30s, Prof Jones guesses.

During Shakespeare's time only one in three children made it to the age of 21. By Charles Darwin's era, the rate had improved to one in two. Now for the first time, there are more people in Britain over 45 than under 45.

"The progress has been astonishing," he notes. For the last 50 or so years life expectancy has been increasing at a rate of six hours a day."

Everyone says it can't last, and yet we keep getting older and older. Who's to say it's going to stop?