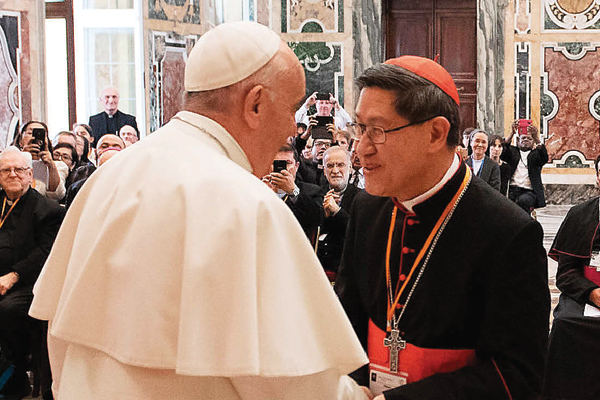 Cardinal Tagle with Pope Francis at an event in the Vatican in 2019 - Photo: CNS/Vatican Media

The charismatic, socially progressive, doctrinally cautious head of one of the Vatican’s most powerful departments talks to Catherine Pepinster of his hopes and fears for the post-Covid world

Getting to talk to Cardinal Luis Tagle is a hard task. We’re all set to chat in the days before he gives a talk to the Westminster Abbey Institute – but then he cancels. We fix it again: and with just an hour to go before our meeting, his office cancels, saying there is a crisis. And then, third time lucky: it happens.
As a cardinal who is both prefect of the Congregation for the Evangelisation of Peoples and president of Caritas Internationalis, as well as the Catholic Biblical Federation, one expects him to lead a busy life. But it turns out that Covid-19 is making his life even more complex than usual.
When we finally chat, he is profusely apologetic. It turns out that the crisis which his staff mentioned was to do with the coronavirus pandemic. “I’m in quarantine!” he says, and I peer, via Facetime, at a casually dressed man sitting in a cell-like room with typically Italian shutters, that show he is in Rome. It turns out that one of the seminarians that he ordained priest a few days earlier tested ­positive for Covid-19. Like everyone else involved, he has had to hunker down for 14 days.
This is the Italian rule, despite Tagle having already had Covid -19. In September he went home to the Philippines for his mother’s ninetieth birthday and took a test, which proved negative, before he flew into Manila. But another test on arrival showed a positive result. Fortunately he had arranged to arrive a fortnight before the actual birthday, so did not miss his mother’s celebrations.
Tagle retains a deep love for family and the Philippines, where he was born in 1957. As Bishop of Imus and later Archbishop of Manila, he was engaged in many social issues, becoming a well-known advocate for the poor while also being reliably orthodox in his defence of the Church’s positions on abortion and contraception.
That pastoral commitment to the poor is also evident in his work in Rome, particularly as president of Caritas Internationalis, the ­confederation of 162 Church welfare organ­isations that is one of world’s largest humanitarian aid networks. Now, with the Covid-19 pandemic, he is deeply concerned that it is the poorest that are particularly affected.
“There has to be pastoral creativity in our response,” he says. “We have been challenged to expand our social services, especially the accompaniment of the vulnerable. At Caritas, we have focused most on education to help resilient communities prevent the contagion.” It has provided masks and disinfectant as well as information about disease prevention, as advised by scientific and medical experts.

While it is natural for people to be particu­larly concerned about their families, Tagle acknowledges, Christians need to go further than that and reach out to others. It is what he calls “a social type of love”.
“Some people see this activity as a restriction on freedom. I would say it is about how the whole of humanity can come together to ­benefit us all.” This connectedness is also at the heart of Pope Francis’ recent encyclical, Fratelli Tutti. The document articulates a theology and a vision for the Church that Tagle clearly shares. “Pope Francis started writing it before the pandemic but it is prophetic,” he says. “He is saying the local and the global should be in constant communion. If the common good is not served, then our own good is not served.”

We talk just before Cardinal Tagle records a conversation for the Westminster Abbey Institute with Elizabeth Adekunle, the Anglican Archdeacon of Hackney in east London, discussing wisdom and how it can be nurtured by religion. “Wisdom,” he said during their exchange, “is God’s gift, not just the product of human achievement. Yes, we need skills and human decisions but we also need gifts and grace.” He is clearly struck by the countercultural aspects of God’s love: “In the person of Jesus … we have the wisdom of God that comes across as absurdity but it is the wisdom of love that gives everything. The wisdom that stoops down to wash the feet of others. It creates a reversal of culture. The master comes to serve … The wisdom of God!”

There is an enthusiasm about Tagle and an easy charm that one can imagine persuading even the most cynical that Scripture offers plenty of insights into wisdom. Yet plenty of people in the world seem to have rejected Christianity. Is the chasm between the Gospel and the more material world now too wide?

Tagle clearly is not disheartened himself but admits that “it is disturbing how the world is, and sometimes we feel disheartened. It was Paul VI who said that the modern world will listen more to witnesses than to academ­icians. We have to be witnesses.”

But he does not brush criticism aside.

“It is important for the Church to listen carefully to opposition. Part of wisdom is to accept that we have erred and been deficient. We need to repent and take the path that is more in keeping with the Gospel in our pastoral care of the people abandoned.”

As president of Caritas, he has become increasingly concerned about the plight of refugees and forced migrants, but there is also a very personal reason for his concern. His own maternal grandfather was born into poverty in China. His mother was unable to cope so he was raised by an uncle and he ended up in the Philippines as a teenager. His daughter, Tagle’s 90-year-old mother, married a Filipino Catholic, and Luis Antonio was born in Manila in 1957. Much of his grandfather’s life remains a mystery and Tagle is still trying to find out where in China he came from.

He remains deeply concerned about forced migrants, trafficked across the world and made to work in appalling conditions. “Unless we work together, forced migration will become one of the biggest businesses in the world,” he says.
The conviction that the Church needs to work with others is matched by his desire that it listens, too – to survivors of child sexual abuse, to the divorced and remarried, to the Eastern Rite Churches about the merits of married priests, and to women when considering the role of women in the Church – although, despite his reputation as socially progressive, Tagle rules out women priests. He wants the Church to consider the insights of the social sciences, including psychology, to better understand homosexuality.

Shortly before we met, Pope Francis had said in a documentary that same-sex couples should be protected by civil unions and that they have a right to a family. First, Tagle told me, prejudice against gay couples needs to be tackled closer to home. “We need to begin with the families that discriminate against their own,” he says.

As prefect of the Congregation for the Evangelisation of Peoples, Tagle is focused on the decline of faith in some parts of the world and the growth of the Church elsewhere. Pope Francis, he says, “has broken free of trad­ition and gone to the peripheries” in his search for new cardinals. The latest consistory saw another cardinal installed for the Philippines – Cardinal Jose Advincula – plus others from unexpected places, such as Brunei and Rwanda. But Tagle is also focused on Europe, where church attendance and influence is falling. There is a real problem, he believes, of the Church fossilising unless it understands the era we are living through.

“I see it here in Italy, the tension between conserving the heritage and facing new ­realities,” he says. “We do need to draw from the tradition but also to find new ways of expressing faith. There has to be a continuing aggiornamento, but we must respond to the needs of the times.”

No wonder Luis Tagle is described as “the Asian Francis”. At the last conclave, the cardinals went, as Francis himself described it, to the ends of the earth to find a new pope. Next time, they could reach for a man from as far east from Rome as Francis was west – except the man from Manila is currently right there in the Eternal City. Could he possibly be Pope Francis II?

Catherine Pepinster is a former editor of The Tablet. Her latest book is Martyrdom: Why Martyrs Still Matter (SPCK £25; Tablet price £22.50).

“How does religion nurture wisdom? A dialogue between Cardinal Luis Tagle and the Venerable Elizabeth Adekunle”, facilitated by Westminster Abbey Institute, is available at www.youtube.com/watch?v=UVxyN0RwuZo