Working towards a full-scale 'paradigm shift'

Robert Mickens, Rome - La Croix International - Wed, Feb 14th 2018
Pope Francis has not just unleashed the stifled energies of Vatican II, he is actually leading the effort to help the church enter into the new paradigm 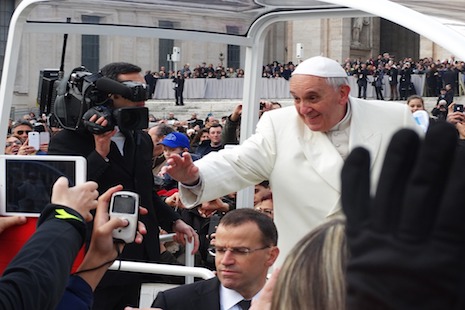 Cardinal Pietro Parolin this week put his finger on the single most important issue that has become the driving force of the small, but tenacious opposition to Pope Francis and his pontificate.

It is the full-scale “paradigm shift” the pope is working so diligently to bring about within the global Catholic Church.

That’s not exactly how the pope’s Secretary of State articulated it in a video-taped interviewposted Thursday on the Vatican News website.

But looking at the many changes and processes for change that Francis has set in motion since being elected Bishop of Rome in March 2013, the paradigm shift is definitely well underway. And this has caused some very influential people – both inside and outside the church – to be extremely worried.

So what did Cardinal Parolin actually say? He actually used the word “paradigm” three different times in the recent interview conducted by the Holy See’s Secretariat for Communication.

The first instance was in reference to the creative approach the Vatican is taking to prepare for next October’s meeting of the Synod of Bishops, which will discuss issues regarding today’s youth.

“I believe the most innovative aspect to this approach is the search for a new relationship between the church and young people, based on a paradigm of responsibility that excludes any form of paternalism,” the cardinal said.

The other two instances were in reference to how the pope’s apostolic exhortation on the family, Amoris Laetitia, has been received by Catholics.

“Here, too, I would probably use the same term that I used before; that is, ultimately, Amoris Laetitia came about from a new paradigm that Pope Francis is carrying out with wisdom, prudence and even with patience,” he said.

The cardinal said critics of that document might have problems with “some aspects of its content,” but their difficulties are “really due to this change of attitude that the pope is asking of us – a paradigm shift.”  He said this shift is “inherent in the text itself” and demands “this new spirit, this new approach.”

Cardinal Parolin then alluded to the fact that this “paradigm shift” – though he did not actually repeat that phrase – is also at the heart of the reforms the pope has slowly been trying to bring to the mentality and structures of the Roman Curia.

But what the cardinal did not say is that Christianity itself has gone through a number of paradigm shifts throughout history. The most recent one, and the one we are experiencing right now, actually began unfolding well before the Second Vatican Council (1962-65) ever got underway.

The Council Fathers tried to discern the signs of the times and the promptings of the Holy Spirit and, with near unanimity, re-articulated the principles of ecclesiology, theology, ecumenism and ecclesial-civil relations to help prepare the Roman Church for this major constellation shift. But each and every pope that was elected during and after Vatican II – through excessive prudence and, sometimes, reticence – sought to carefully harness or even curtail this process.

That is, up until the arrival of Pope Francis.

The 265th Successor of Peter, and fifth of the post-Conciliar era, has not just unleashed the stifled energies of Vatican II that were meant to help the church enter into the new paradigm. He is actually leading the effort.

This is something completely new. For while a paradigm shift has been underway at the grassroots in many parts of the Catholic world for decades, it has never been fully embraced or encouraged by the Bishop of Rome or his aides at the Vatican. Quite the contrary!

The Church of Rome has fought mightily for more than a millennium and half to protect specific prerogatives, privileges and powers that it accrued, not through any divine mandate or in fulfillment of the Scriptures, but through the benevolence and political calculations of worldly rulers. Most specifically, it has clung to the early post-Constantinian paradigm of Christianity and the monarchical structure and protocols it adopted from the collapsed Roman Empire.

As the global Christianity continues to be recast in the current ecumenical paradigm, the Roman Church, in its outdated, un-evangelical and historically anachronistic structures and ethos, is imploding.

“The only way Pope Francis can help save the Church from its ongoing implosion is by making structural changes that will foster (a) doctrine of shared governance between him and all the bishops, as well as heighten the awareness of the church as a communio of all the baptized and ensure their full participation in the liturgy and the Church’s mission,” I wrote in March 2013 for an article in the Tablet during the first days of the new pontificate.

That article was followed several weeks later with another piece, which posited the following:

“This means that Papa Francesco will have to help liberate the papacy from its monarchical forms and trappings and the Universal Church from being exclusively Eurocentric. Because he is the first pope to hail from outside Europe in thirteen centuries, he seems poised to set this radical and necessary reform in motion…”

“As a man who was born and raised in the New World, the Argentine pope also appears to be largely immune to the mentality of the ancien régime, which still inhabits the minds of many conservative European churchmen of his generation. In this regard, he stands in stark contrast to his immediate predecessor.

“Benedict XVI surely understood the need for reforming the papacy and freeing it from at least some of its monarchical forms, but it was impossible for him to even know how to do so. As a quintessential European ecclesiastic of a certain age, he lamented the loss of the old world order where the noble classes (bishops among them) brought stability to society and age-old protocols helped preserve an eroding Euro-Catholic ethos and culture.

“Pope Francis apparently does not share this mentality, nor does he seem the least bit interested in the rituals of the old papal court, many which still remain and are obstinately defended by influential figures in Rome… It is more likely that the idea of monarchy – and certainly the monarchical developments (deformations) of the papacy – holds little or no value for him.

“Thus it would not only be quite easy and natural for him to dispense of its trappings, but an essential duty to the demands of the Gospel and fidelity to the true message of Christianity” (Tablet, 1 June 2013).

You can judge for yourselves if that assessment (or forecast), penned over four-and-a-half years ago, has proven to be correct.

Those words certainly expressed the fears of Pope Francis’ fiercest critics. These people may tightly clutch to the Code of Canon Law or their copy of “Denzinger” (the 19th century handbook of dogma) and say their criticisms are out of love for Christ and his church; that their only goal is to preserve its immutable and age-old teachings. But, as Cardinal Parolin suggested this week, questions over church teaching actually have little to do with their opposition to Francis.

Rather, their fight with the current Bishop of Rome is over his dogged determination to free the church, once and for all, from those (like them) who continue to stubbornly hold on to every last and crumbling vestige of its monarchical-exclusivist-ancien régime structures and mentality.

These critics of the pope seem to have an awfully hard time distinguishing what pertains to the essence of Catholic Christian faith from that which is non-essential or merely cultural. They are stuck in an old paradigm, one that – thanks to Pope Francis – is more quickly slipping away.