Worship beyond lockdown – how much does Mass matter? 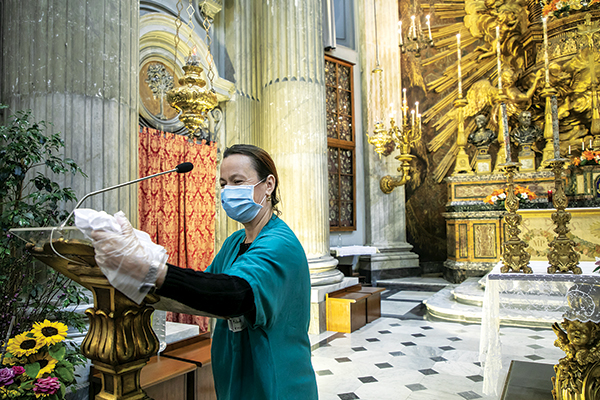 The churches are open for private prayer, and public Masses will soon resume. But for many Catholics, the lockdown has taught them new ways of living their faith

This week, for the first time in months, Catholics in England ventured across the threshold of their churches. It was really only a tiptoe, a peek around the door after months of being locked out. There was no gathering for Mass, no congregating for the Rosary, no joining together for vespers. But it was at least a start, to see again the familiar statues of the Virgin Mary and the Sacred Heart, to pray in thanks before the Blessed Sacrament, and to remember those who have died. People are back in the familiar places that they have only been able to see via live-streamed Mass, though now as they enter the church, rather than crossing themselves with holy water, they must dab their hands with sanitiser.

For many people, lockdown has meant a moment to think again about how one prays, why one attends Mass, why people feel the need to be in what is often called a sacred space. After all, God is everywhere. Why does the church building matter so much?

Online Masses have proved popular. People have become Mass pilgrims, seeing from their armchair how the liturgy is enacted across the country and even the globe. Paul Farmer, chief executive of the mental health charity Mind, said that for him it had emphasised that he belongs to a universal Church. Mgr John Armitage, rector of the national shrine of Our Lady of Walsingham, told me: “The lost group of Catholics have been people who didn’t go out even before lockdown because of ill health and frailty and suddenly they feel part of something again.” He’s noticed that people wanting to try out the Church, or who have lapsed from their faith, find live-streaming Mass a much easier way of venturing in for the first time, or coming back.

Others can’t wait to get back to being part of a congregation. The notion of “spiritual communion”, instead of receiving the Eucharist, has not been enough. Research undertaken by Professor Francis Davis of the Universities of Birmingham and Oxford in collaboration with Catholic Voices found that 93 per cent of those surveyed said they had participated in online worship to some degree, but 83 per cent said they missed their churches. Only 17 per cent said they would mostly continue to worship online.

For those who study the liturgy, this desire for church confirms what they understand of anthropology. Daniel McCarthy, of the Pontifical University of Sant’Anselmo in Rome, says that the gathering of the people is what matters, and that thinking of a church as a special, sacred space is problematic. “The problem with calling a church a sacred place is that it objectifies sacredness as a thing ‘out there’. Since the Incarnation, sacredness resides in the human person and community primarily, and only by association in the place. A building is called a ‘church’ by association with the church as community gathered inside. People watch sporting events on TV and no one says that the sitting room is a stadium. But the viewers participate as they can in the activity.”

Professor McCarthy’s liturgist colleague, James Leachman, also stressed the importance of being physically present at Mass. “Online liturgies allow only ‘spectator’ ­participation,” he says. “I find the idea of ­ ‘spiritual communion’ during media partici­pation ­inadequate because the relational and ­community dimensions are missing.”

That relational aspect of Mass was something that was brought home to Francis Davis when it was missing during lockdown. “When I go to Mass in a city-centre parish, I sit next to an Indian man who works nights at the hospital and someone else who is high up in the Royal Society of Chemistry. There is that huge mix of people and they are all there together. It is about solidarity and a community.”

Solidarity, though, is not just a nice, warm feeling that ends when Mass ends, but feeds our relationships with society and has a noticeable positive impact on the wider world. According to Pew Research’s 2017 report, “Being Christian in Western Europe”, across 15 countries in Europe, participation for at least an hour a month in a community group or voluntary organisation increases with the individual’s level of commitment to Christianity. So an individual’s strength of religious affiliation – a variable which polls often struggle to capture – makes a difference to engagement with local voluntary action.

For many Catholics, that engagement has become more meaningful during lockdown. They have found God beyond church – just as they always do – but it has mattered even more. The Catholic Voices study shows that 60 per cent of Catholics say that lockdown has helped them feel more neighbourly, with people stepping up to volunteer, keep an eye on other parishioners, and working to support NHS workers and the homeless.

Lack of Mass has also inspired people to find God in nature and in other forms of devotion. Theologians Tina Beattie and Julie Clague, for example, both told me how they have noticed how important Creation has become to them. Marcus Pound, of Durham University, has noticed people finding their own means of devotion. Yet many have found that church cannot be easily replaced. They have discovered how important it is to ­celebrate Mass in a place that acts as a link with both past and future. As Beattie says: “There is something about the sense of history, about the continuum, that we find in a church that matters. We are sensory creatures and Mass in a Catholic church appeals to all the senses.”

Clague has noticed how much the rhythm and routine of Mass matters, particularly to the elderly. She usually takes her uncle, who has dementia, to Mass and he has constantly asked about going to Mass on Sundays. But the slowing down of life has helped her own spirituality. “Here is a situation where I can give something my undivided attention and that enables us to be more meditative.” The Catholic Voices survey showed that 55 per cent of Catholics surveyed said that lockdown had helped them to become more prayerful.

So what will we want from the Church when stepping into church again, if only for private prayer? Conversations with Catholics, ­especially women, indicate that watching live-streamed Mass with a solitary priest at the altar has made them even more aware of how clerical and male-dominated the Church seems. Some are going further and asking whether we have become too focused on the Eucharist for our prayer life.

According to Marcus Pound, there has been “a eucharistic centrism that defines Catholicism in England in a way that does not happen elsewhere” – something that he thinks might be “due to our recusant nature”: a connection to the past when Mass was illegal and infrequent, and made Mass and receiving Communion all the more precious.

Daniel McCarthy has also noted the way in which the Eucharist has come to dominate Catholic life. “The sole reliance on the Eucharist in healthy times is exacerbated in time of pandemic,” he said. “Had we developed the celebration of the liturgy of the hours more fully, then people at home could actually celebrate liturgy and all this fuss about ­spiritual communion would be obviated.”

Nevertheless, different ways of praying have been discovered. Cardinal Vincent Nichols has commented on the way in which the home has become sacred – something that has been strong in Judaism, but not understood so powerfully among Catholics. Christopher Jamison, abbot ­president of the English Benedictine Congregation, says the pandemic is leading to a “new way people are learning to live their faith”. Part of that, he observes, is being less clergy-centric. But it is so much more than that. It is being ready to embrace a calling to service: “As the health crisis morphs into an economic crisis, the poor will grow in number dramatically. The Catholic Church in Britain, however, isn’t yet ready to bring the poor on our doorstep to the very centre of life in every parish and every monastery.”

Jamison offers this challenge: “How can the community give both social and liturgical expression to the sudden emergence of a vast number of people in need? We have a Pope who has lived such a response for years in Latin America, and ­following his lead, we can become the Church of the Good Samaritan.”

Catherine Pepinster is former editor of The Tablet.