Chinese president should be told that if China wishes to be trusted, it must rethink how it treats its own people. 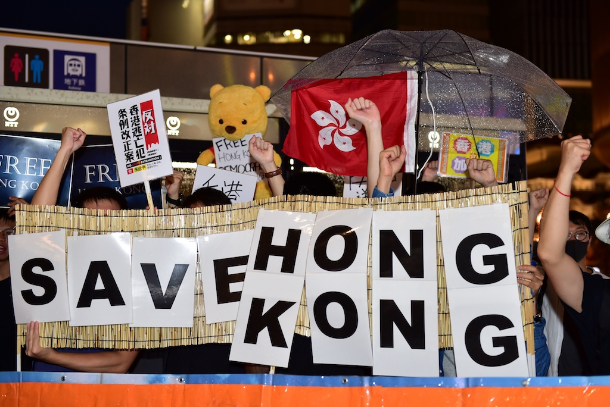 Protesters take part in a demonstration in Osaka, Japan, on June 27 against a controversial extradition bill in Hong Kong, ahead of the G20 summit. They called for G20 nations to confront China over sliding freedoms in the financial hub. (AFP photo)

As leaders of the 20 most significant economic and political powers in the world gather for the G20 summit in Osaka today, there is one who must face some particular questions from the others. That is China’s Xi Jinping.

U.S. President Donald Trump will clearly want to talk to President Xi about trade, but alongside the U.S.-China trade war there are several other urgent challenges that must be raised. Indeed, when it comes to China, there isn’t just one elephant in the room but an entire herd, and leaders must unite to confront these with Xi head on.

Hong Kong is clearly one of the biggest and is relevant to the trade and economic interests of the summit. Along with New York and London, the Chinese territory is one of the top three international financial centers. It is a regional trading hub. It is a gateway to mainland China and a place where businesses have banked assets and stored capital. It has had a reputation for stability, security, transparency and the rule of law.

The recent debacle over the proposal to introduce an extradition law that would allow for suspected criminals to be extradited from Hong Kong to the mainland has shaken business confidence in the city. To allow for extradition from a city ranked by the World Justice Project 16th in the world for the rule of law to a jurisdiction ranked 82nd would be suicidal.

Lam Wing-kee, a bookseller who disappeared into detention in mainland China in 2015 for eight months, told me that he moved to Taiwan from Hong Kong this year because if this law is implemented, he fears for his safety. The extradition law would, he said, be a “death sentence” for Hong Kong.

That was why over a million Hong Kongers marched on the streets just over two weeks ago, it was why thousands braved rubber bullets, tear gas, pepper spray and police batons a few days later, and it was why — despite the police brutality — two million people marched just over a week ago. It was also why chambers of commerce spoke out, and over a hundred businesses closed to allow their employees to march — the first time the business sector, the legal sector, the pro-democracy movement and ordinary people in their hundreds of thousands have been so united.

Hong Kong’s Chief Executive Carrie Lam finally announced the indefinite suspension of the proposed legislation, but understandably Hong Kongers say that is not good enough. For any confidence to be restored, the bill needs to be completely, unequivocally and permanently withdrawn.

As Britain’s former foreign secretary Sir Malcolm Rifkind and the last governor of Hong Kong Chris Patten have argued, the decision before the handover of Hong Kong 22 years ago not to have an extradition arrangement with the mainland was deliberate in order to create a “firewall” to protect Hong Kong’s autonomy under “one country, two systems” system — not, as Lam suggests, a “loophole.”

So, in Osaka, world leaders must give Xi a clear message: if Hong Kong is to remain a viable international financial center and trading hub, the extradition bill must be taken completely off the table. There is a firewall to protect, not a loophole to close. Furthermore, police brutality two weeks ago must be investigated and held accountable.

Britain’s Prime Minister Theresa May must make a point of raising Hong Kong, and wider concerns about the erosion of the city’s freedoms and autonomy, and emphasize that the Sino-British Joint Declaration remains a valid legal treaty, lodged at the United Nations, at least until 2047. Xi should be left in no doubt what the G20 will think if he proves that China cannot be trusted to live up to its international treaty obligations.

While China does not want democratization in Hong Kong because of fear that it could threaten the Communist Party’s rule on the mainland, the case could be put to Xi that allowing for more representative democracy in Hong Kong is the only way to avoid further mass protests of the kind we have seen in recent weeks. One of the reasons almost a third of the population joined the protests is that they feel they have no other way of making their voice heard. Give them democratic reform and stop threatening their basic freedoms, and such mass demonstrations will be less appealing.

The incarceration of at least a million Uyghur Muslims in prison camps in Xinjiang, and the steady assault on their culture, religion and identity, must also be raised. Chinese state media have stated that the campaign against the Uyghurs aims to “break their lineage, break their roots, break their connections and break their origins.” As the Washington Posthas said, “it is hard to read that as anything other than genocidal intent.”

China’s relationship with North Korea must also be on the agenda, following Xi’s visit to Pyongyang last week. Xi’s unusual pledge in an op-ed in an official North Korean newspaper that he would support Kim Jong-un “no matter what” sounds like a not so veiled threat to critics of the North Korean regime, and it appears to bring to an end China’s relatively more constructive approach to the question of denuclearization. It would be surprising if Trump didn’t want an explanation from Xi.

China’s policy of forcible repatriation of North Korean refugees, sending them back to a certain fate of brutal torture, horrific conditions in prison camps and possibly execution, in violation of international humanitarian law, must also be called out.

China’s increasingly aggressive behavior around the world, its bellicose threats to Taiwan, its continuing repression in Tibet and its assault on religious minorities throughout the country must be on the list too. As U.S. Ambassador for International Religious Freedom Sam Brownback has said, the regime in China is “at war with faith” but it is a war they cannot win.

The other 19 leaders meeting in Osaka should be reminded that, in the words of Sir Geoffrey Nice, the lawyer who led the prosecution of Slobodan Milosevic and chaired the China Tribunal into allegations of forced organ harvesting from prisoners of conscience, anyone who interacts with the Chinese regime should recognize that they are "interacting with a criminal state." In the judgment of the independent China Tribunal last week, it is “beyond reasonable doubt” that the forcible extraction of organs from prisoners of conscience has happened and that such acts constitute crimes against humanity.

Leaders at the G20 must interact with President Xi, but they should do so with that warning in mind. For too long, too many in the world have kowtowed to China’s regime. That must change in Osaka. Xi must be told unambiguously that if China wishes to be respected and trusted in the world, it must rethink how it treats its own people and how it behaves towards others.

Benedict Rogers is a human rights activist and writer. He works for the international human rights organization CSW, is co-founder and chairman of Hong Kong Watch and deputy chairman of the U.K.’s Conservative Party Human Rights Commission.

The views and opinions expressed in this article are those of the author and do not necessarily reflect the official editorial position of ucanews.com.