To Understand the Incomprehensible ……..that’s Faith. 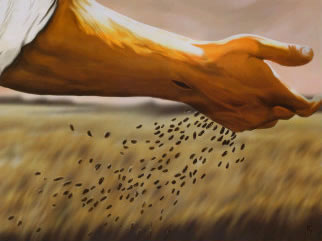 Two planes collided over Switzerland and crashed. Boys and girls coming from Russia to Barcelona for a few days break lost their lives. There were no angels in space to prevent the disaster. Only the unperturbed sky saw the accident. Where was our God, our loving Father? Only the demons of death did their work. In these cases we blame human failure. We are sick of human failings. Human beings let down the Creator so often. Why doesn’t he do something about so many failings?

We can’t do anything about this misfortune alone. There are many others who ask us, “Where is our God?”

The big questions are still unanswered and we need to raise them again. Only this way will we grow in Faith. This Sunday will help us to deepen our Faith and trust. It is not enough to repeat automatically tropical phrases such as “his ways are not our ways”. It is important to recognize that “to believe” is a risk, an adventure, a gamble in order to gain everything. To understand the incomprehensible…..that is faith.

What wonderful trust does the prophet Isaiah show in the word of God. He believes without the least doubt in its effectiveness. He was known as the “Servant of the Word”. There was evidence that there were people who opposed his ministry, who didn’t believe in his message. Nevertheless he had the deep conviction that the world of God is stronger than whatever opposes it.

The image of the rain and the snow is very eloquent. They bring fertility to the earth that will produce fruits. The same happens also with the Word of God.

If we are convinced of his we will do our utmost to beat the service of the Word both in season and out of season. The word doesn’t need help, or support, or too many commentaries. The Word needs only men and women to be witnesses and faithful transmitters. The Word will save the World.

To meditate on the Word of God everyday is to allow it to penetrate the heart; it is the best therapy is in a social gathering; it is the seed of joy, of peace and of serenity.

The Glory that will be manifested.

To have faith is a gift, a great gift. It allows one to see reality in another way, from another dimension. Faith opens doors to hope.

Not long ago I went on a journey. The person who accompanied me, a diplomat and intellectual, told me that he wasn’t a believer. He recognised that he didn’t have the gift of seeing things in a different way. He questioned the existence of God in the midst of such a disorderly world, a world so unjust as ours. Once more the usual question arose that opens the door to existential atheism. How can a "good" God permit so much evil so much suffering, so much death, and so much injustice?

I asked myself what is my gift of faith due to? Why am I more enlightened that this man? Suffering, injustice, savage deaths also affect me but I have a mysterious conviction. The Father, God Creator knows everything, understand everything, manages everything. Those who are intermediaries of his Revelation tell us like Paul in this reading: “What we suffer now is nothing compared to the glory that one day we will share.”

All is confused in this world. There is a negative force that doesn’t come from the Creator that has subjected everyone into slavery. Nevertheless the definitive victory over evil is already showing promise and has begun.

To have faith and hope is a great gift. It allows us to approach life in another way, with other morals. As Sister Victoriana (a Sister of Charity of St. Anne) once said to me. “And if it is not the way we think, what does it matter?”

The skill of seeing and understanding.

When a person is not disposed to seeing, or understanding, he does not see, nor understand. When a person is alert, seeks and directs his heart he sees and understands even more than he could ever imagine. He who isn’t waiting for anything is not vigilant. Whoever is waiting is intent on not losing the slightest signal. Jesus complained about this. In his time there were people who waited for nothing and were not vigilant. For many men and women his words had no meaning. His words brought no message. They saw without seeing, listened without hearing and understanding. Likewise today in our Societies we meet people totally closed to understanding something new, something different.

Jesus expressed it in another way with the parable of the Sower. What does the Word of God germinate in some people and not in others? Why is there closure? There are hearts only slightly opened to the good news, brains largely closed to new knowledge.

I have met some people who call themselves believers but who are closed. They don’t have anything new to learn, no knowledge with which to enrich themselves. They are closed to his teaching, to the truth.

Jesus does teach us today the skill of seeing and understanding.  It is good for us to let ourselves become fertile for the good news, to have soil in which good seed can germinate.